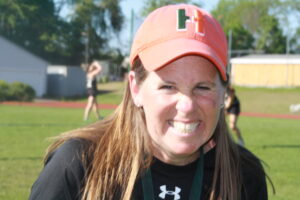 Amy Mick’s passion for soccer was infused during her time patrolling the fields at the Noble and Greenough School, where she was a standout high school player. A knee injury and seven subsequent surgeries kept her from pursuing an opportunity to play Division 1 college soccer at Notre Dame, but the game has been part of Mick’s life through her role as president of Hopkinton Youth Soccer.

She recently stepped down from that post after a dozen years, and she said she is proud of the strides the organization has made and will remain an active participant in Hopkinton’s soccer community.

“I have been doing this for a long time,” Mick said, noting that she took over in the spring of 2010 after previous president Brian O’Keefe helped usher in the Fruit Street field project.

“I wanted to carry that forward and make sure everything was taken care of,” Mick said. “I also wanted to make sure we had a variety of programs available to service kids and families of all different levels and help to get a turf field at the high school.”

Added Mick: “I feel like our program is at a really good place and my kids are getting older. My oldest is in college and my youngest is in the fifth grade. I felt like it was time for new blood, fresh faces and fresh ideas.”

Mick has seen four of her children participate in the youth soccer program with varying levels of passion. She began playing the sport at a young age and it became a huge part of her life.

“It wasn’t just about soccer, it was about being part of a team and a community,” the Framingham native said. “I wanted to pass that along to Hopkinton. We have a great community and a lot of kids and families who participate in sports, so I wanted to do what I could to help out.”

Michelle Midkiff is taking over as president and said HYS will recognize Mick’s contributions by creating a scholarship in her honor and by putting up a banner at the tennis courts thanking her for her service. In a letter to HYS families, Midkiff said she is “all in on this adventure that passes on the soccer experience to the next generation.”

“I am looking forward to helping our kids with forming friendships, understanding the concept of teamwork, developing their fitness, muscle strength and coordination, learning about taking risks, making mistakes and recovering from them, building resiliency, acquiring leadership skills, learning to win and learning to lose, gaining respect while being respectful and having lots of fun along the way,” Midkiff wrote.

Midkiff said she expects participation in the program — already at a high level — to continue to increase.

Mick, who also coaches the Hopkinton High School girls junior varsity team, said she still will be involved with the HYS board and helping out in any way she can.

One upcoming issue is the ballot initiative slated for May’s Annual Town Meeting that will deal with replacing the artificial turf at the Fruit Street fields. Mick said the shelf life for the field has come due and hopes the town replaces the surface with a more environmentally friendly infill and a shock pad to reduce concussion risks.

Mick added that she will serve as a liaison between the youth and high school programs.

“Players in the high school program are ready and willing to give back,” she said, referring to clinics organized by high school athletes for their younger peers. “The high school kids do all the planning and run everything and it’s hugely successful.”

And, as the JV coach, Mick will continue to get to know athletes who work their way through youth soccer.

“It’s great for me,” she said. “I love that I have been able to see so many of these kids who grew up through the program.”