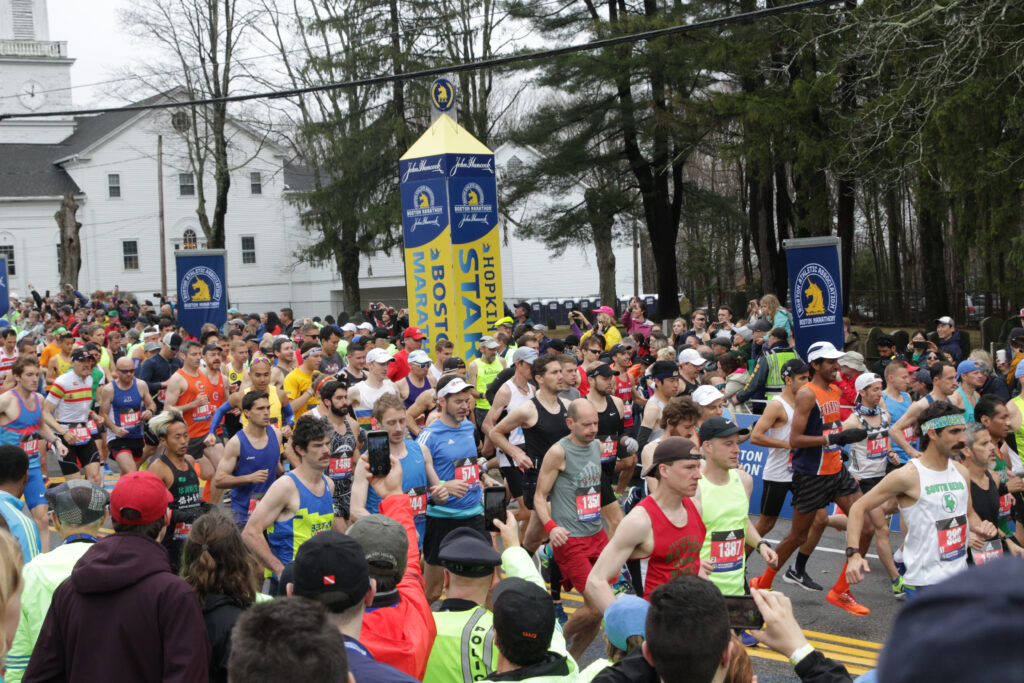 Boston Marathon runners once again will race down Main Street, but it will take place in the fall instead of the spring this year. FILE PHOTO/TRICIA LACASCIA PHOTOGRAPHY

To hear Hopkinton Select Board member John Coutinho tell it, there was never any consideration given to canceling the Boston Marathon. It was always a matter of when, not if, it would take place.

At a press conference in Boston on March 13, Boston Athletic Association officials, Gov. Charlie Baker, Boston Mayor Marty Walsh and Coutinho announced that the race would be rescheduled to Sept. 14, a Monday that will be declared a state holiday called Marathon Day.

Coutinho, who serves as the town’s liaison to the BAA, raved about the “cooperation and collaboration” that took place, saying it’s a great example of how the relationship between Hopkinton and race organizers has improved in the last few years.

“Over the last six years, since I’ve been the liaison, we’ve really worked on the relationship,” Coutinho said. “Because for so many years it seemed to be — I wouldn’t call it adversarial, but it was, ‘You’re coming to use our town, what are you going to give us?’ And not understanding that it’s part of us. It’s four generations, a hundred years. It’s a part of who we are.”

It will be a part of Hopkinton again in 2020, just five months later than usual. To some, including 26.2 Foundation executive director Tim Kilduff, that’s more than acceptable.

“It adds a new chapter in the history of the Boston Marathon that’s going to strengthen its position not only in Massachusetts but in marathoning worldwide,” Kilduff said. “This is incredible what they’ve done. You can’t underestimate it. I think they have now set the stage for what will be one of the most important and famous Boston Marathons ever run. And I’m not exaggerating, either. Think about it. Everyone has done cartwheels here. So I’m really excited about looking ahead to September 14th and what it means for all the communities.

“The governor has created a one-day holiday, for heaven’s sakes, Marathon Day. It’s unprecedented. So from that point of view it’s something to look forward to.”
In addition to the uniqueness of this year’s event — the Boston Marathon has always been run in April — it gives runners the opportunity to train in warmer months for once.

“Training through the winter is always challenging in the Northeast,” Kilduff said. “And if you run all through the winter, the challenge is it could come up cold, hot, rainy or something in between [on race day]. It’s tough to prepare for that. This sort of now sets a pretty clear path and dictates to these runners how they ought to prepare. So I think it’s a plus.”

Kilduff said he does not anticipate any issues with the new date.

“I don’t see any challenges,” he said. “The only challenge, the governor has alleviated, and that is to create a holiday so that the schools are closed. It replicates the same guidelines that exist for the April start. It’s the same thing.”