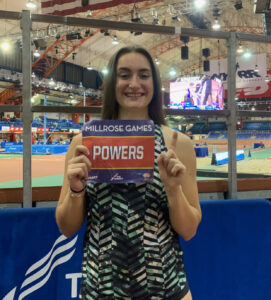 HHS senior Kate Powers displays her bib at the Millrose Games in New York City, where she finished first in the girls shot put.

Hopkinton High School girls indoor track and field coach Jean Cann is accurate when she says this year’s team is not quite as strong as in seasons past, but she also is comparing the team against the program’s incredibly lofty standards. The Hillers lost two meets this winter, the first losses for the program in about seven years.

Hopkinton lost out on some of its momentum from the 2020 state championship during last year’s COVID-affected season, but Cann said the team is moving in the right direction.

“It’s been a good building year and I think we will see it continue into the outdoor season,” Cann said. “We just don’t have as many events where we have a guaranteed win as we have had in the past.”

Both losses could have gone either way. Hopkinton lost by five points to Medfield in the first meet of the season and then suffered another single-digit setback against Holliston. Both meets came down to the final relay with the outcome still in doubt.

Senior Kate Powers has been a leader this winter. A talented thrower, she competes in the shot put, as that is the only indoor weight event. Cann said Powers is likely looking forward to the outdoor season and the discus, but she has excelled in the shot and recently traveled to New York City and won the girls division at the 114th Millrose Games, one of the oldest and most prestigious track events in the country.

The HHS lineup is dotted with numerous other standout athletes. Sophomore Steph Johnson has won nearly every dual meet in both the 1,000 and the 600. Katie Callery and Grace Joy, both seniors, are talented distance runners. Cann said several of her juniors are starting to come into their own after navigating the challenging season last year as sophomores.

“I don’t think they got a full taste last year of what indoor track is all about,” Cann said. “They definitely didn’t get the full training that they would normally have.”

Lily Tourigny and Emily Hayward have shown the ability to run events ranging from the dash to the 600. Shelby Jones is another versatile athlete who joined the team from the basketball program following a strong spring track season that saw her compete in the pentathlon.

Junior Ellie Driscoll has been leading the hurdling squad and Sowmya Karthikeyan, a senior captain, is among the team’s best in the hurdles and jumping events.

“We can rely on her for a bunch of different events,” Cann said.

Adding depth to the jumpers are junior sisters Bridget and Keira O’Connor along with junior Emma Canestrari. Cann also praised her dedicated group of freshmen.

“They never miss a practice, and we’ve been able to rely on several of them in whatever event we have needed to put them in,” she said.

Despite not having as many dominant, top-end athletes as in seasons past, Cann was optimistic that the Hillers would be able to show well in both the league showcase meet and the subsequent divisional meet.

“We have a lot of depth, so we may not get a ton of firsts, but we can get those thirds, fourths, fifths and sixths, and that gives me hope for the TVL showcase meet,” she said. “Our chances are better at a meet like that where our depth can prevail.”