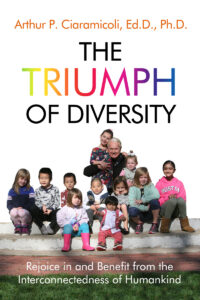 With his latest book, Arthur Ciaramicoli seeks to reverse the trend of a desensitized culture.

In his most recent nonfiction work, “The Triumph of Diversity: How to Rejoice and Benefit from the Interconnectedness of Humankind,” Hopkinton resident Arthur P. Ciaramicoli, Ed.D., Ph.D., examines the recent resurgence of hate, prejudice and divisiveness within the American culture.

“I never intended to write this book,” Ciaramicoli stated, “but the rising rate of prejudice in this society is deeply troubling. It’s up to each of us to live with empathy, understand and embrace diversity, and reverse this dangerous trend.”

A licensed clinical psychologist for more than 35 years, Ciaramicoli’s life work is helping people see their potential, uncovering the good within and guiding individuals to overcome prejudice toward themselves and others.

In “Triumph,” the author points out that much of prejudice is based on learning from distorted sources, but also that a degree of prejudice and discrimination is based on one’s own unresolved hurts.

He explains that when the origin of prejudice cannot become identified, it is often the result of conditioning from the past that has not been examined earlier in an objective manner. Based on distortions, these lessons often are passed down from generation to generation.

Several studies cited prove discriminatory behavior is rooted in the desire to conform to the norms of the group to which one belongs, and that fear often is based on inaccurate assumptions.

“Prejudice and discrimination are learned, just as appreciation for diversity and acceptance and joy in engaging those who seem different is also learned,” he stated. “We must work to end Islamophobia and anti-Semitism, because the struggle is the same — to preserve diversity, inclusiveness and the freedom to be and to speak without fear of reprisal.”

He shares stories about people who have overcome prejudice and stereotypes from neo-Nazi white supremacists to a teenage Muslim boy, from religious, business and education leaders to everyday people. He shows how having an open mind and an open heart has enriched their lives.

“When we deepen our understanding of human nature, our view of the world and of ourselves widens,” he said. “From this perspective, we discover forgiveness for others and for ourselves.”

He addresses “the scary trend of becoming a desensitized culture.”

Credible research cites that frequent exposure to hate speech online or in person desensitizes those listening to forms of verbal violence against particular groups. A study featured in the journal Aggressive Behavior verified that hate speech breeds hate and violence.

“This exposure lessens the perceived suffering of victims and increases prejudice to whatever group is being demeaned,” he stated, adding, “Every time we demean another person for their imperfections, we revisit the times the same behavior was done to us.”

He notes that trust in both business and political leaders is at an all-time low, and that there is a toxicity in leaders who demonstrate “pathological certainty,” the need to always be right. The author urges humankind to expand their minds to see the advantages of living and working in a diverse environment.

Ciaramicoli shows us that awareness and acknowledgement of a biased view is the beginning of changing a perspective one comes to see as untrue. That individuals who work on changing their internal dialogue from negative to positive are usually the same people who become committed to not only seeing the truth about themselves but are likely to become committed to seeing the truth about others.

Triumph shows that two factors are clear — countries, states, communities and individuals are healthier, happier and less prone to discriminate and harm others when individuals have expanded empathic ranges. What is also clear is that “declining empathy is a danger sign for our country.”

Feeling compassion for those suffering in the world, locally, nationally and internationally connects us all to our shared humanity.

“We — you and I — can change the negative trend in our country, and maybe the world, if we don’t generalize, don’t demonize and don’t make assumptions about people or their choices without knowing the facts,” Ciaramicoli said. “We could be a better people and nation if we focused on taking the time to listen and learn from those who seem to have different perspectives than us.”

“The Triumph of Diversity” is available online at open-bks.com and Amazon.com. Visit BalanceYourSuccess.com for more information about Ciaramicoli or to view his bookshelf for other recommended readings and read his blog.