Hopkinton High graduate Mia Rose Coutinho earned a prestigious Fulbright Scholarship this spring, putting an exclamation point on a stellar collegiate career at Lafayette College. The award will take her to Spain, a place where she has lived and studied in the past.

“I was an au pair in Barcelona during the summer of 2018 and I taught English to a Spanish Catalan family,” Coutinho said. “I loved that experience. I never meant to fall in love with Spain, but I returned there when I studied abroad for five months.”

When Lafayette reached out with a number of scholarship opportunities for exceptional students, Coutinho said the Fulbright English Teaching Award seemed right up her alley. In a senior year replete with upended events due to the COVID-19 pandemic, Coutinho said receiving news that she had been awarded the scholarship was a welcome surprise.

“It seemed like every email was something being canceled,” she said. “So it was nice to get something like that.” 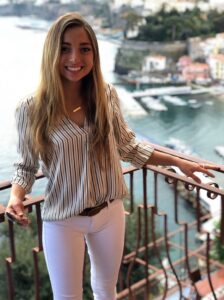 Mia Coutinho won a Fulbright English Teaching Award and is scheduled to teach in Spain next year.

The pandemic has altered Coutinho’s plans just a bit. Instead of staying in Spain for a full school year, she will be aiming to leave for Europe in January of 2021. She will be teaching English at the high school level and also teach other subjects to students in English. As a neuroscience major with a minor in Spanish, Coutinho figured she likely would be teaching science courses.

“At first my interests seem unrelated,” she said. “But the truth is I stuck with Spanish and loved neuroscience so much because it all revolves around education and growth.”

Coutinho said she hopes to pursue a Ph.D. in developmental neuroscience, researching language development in children. She also wants to apply for the Fulbright again as well as other overseas scholarships to see if she can continue her educational career abroad.

The future plans follow a challenging end to Coutinho’s time at Lafayette due to the health crisis. She had been working on her neuroscience honors thesis, gathering data over the course of nine months with an eye toward presenting it at the end of the year. Coutinho and her classmates left for spring break, but the virus meant they would not be returning to campus. The buildings were locked, including the lab with the computer containing all of her data.

“I called facilities, I tried everything,” she said. “It’s hard to think back to March, but back then we thought this might pass and I was under the impression I would be returning after a short two-week hiatus. So I was sort of blindsided by the fact that the data would be impossible to reach.”

Coutinho said several of her classmates had similar capstone projects they were not able to complete due to the sudden closures caused by the novel coronavirus. The hope, she said, is for a return to campus in the fall in order to collect the data and prepare a shorter-than-expected report.

Like many, Coutinho has had to make the most of less than ideal situations amid the crisis. She had planned to run the Boston Marathon this year to benefit the 26.2 Foundation, a Hopkinton-based nonprofit promoting education, fitness and health.

The marathon, originally postponed from April to September, was eventually canceled for the first time in its history. Coutinho said she will participate in a virtual run over the September weekend when the race had been rescheduled, preferably finding a 6-mile route around town and running it four times-plus to cover the distance.

“I did not run in high school, but I think being from Hopkinton there is this love of marathons ingrained in us and that international experience and being in it for the long haul,” she said. “I was never interested in running anything less than a marathon.”

Coutinho has fond memories of Kenya Day, the annual pre-marathon tradition of having the elite runners visit Elmwood Elementary School students before the race.

“That was my original experience with being a cultural ambassador,” she said, recalling learning Kenyan folk songs and Swahili phrases. “The international runners were just as excited as us to be there, and I became fascinated with learning other languages.”

That experience helped spark a lifelong love of learning and education that has brought the 2016 Hopkinton High School graduate a tremendous amount of success for her young life. Coutinho credits her teachers, including English teacher Lauren Polansky and Steve Simoes, from whom she learned international politics.

“I had really excellent teachers at Hopkinton,” Coutinho said. “They made me love the subjects I now study.”