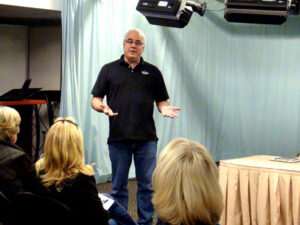 HCAM’s Jim Cozzens leads a workshop that teaches residents about all aspects of television production.

Jim Cozzens’ television career began with aspirations of being the next big Hollywood filmmaker.

Not long after getting his first job in the industry, he discovered that he could make a bigger impact in local living rooms than on the silver screen.

“I originally wanted to be the next Steven Spielberg,” said Cozzens, who helped found Hopkinton Community Access & Media (HCAM-TV). “Within six months, I realized [that] rather than make a two-hour movie that millions of people would enjoy, I would rather spend my career at a small television station that a town could use every single day, and I’ve never left access TV since.”

Cozzens, born in Dudley, graduated from Boston University with a degree in broadcasting and film and previously worked as a production assistant and then public access director in Westborough before shifting his focus to Hopkinton.

Before there was HCAM, there was HOP-TV. Cozzens volunteered at HCAM’s predecessor, covering school committee meetings, developing the station’s first website and resurrecting the classic “All About Hopkinton” program.

Once Comcast decided it was no longer interested in the day-to-day operations of HOP-TV, the Select Board voted to create a non-profit organization to run the community access channels, and thus HCAM was born.

As the chair of the cable committee at the time, Cozzens knew there was an opportunity to create something special.

“Very succinctly, HCAM’s mission is to connect community, and that is all aspects of community,” he said. “Non-profit corporations, government entities, business owners and the residents of town. We connect people with information they can use every day.”

For Cozzens, there is no greater passion than community information. Over HCAM’s nearly two-decade lifespan, he feels that passion has been well-received — and reciprocated.

“People call me, thanking me that we’re airing our sports games because they’re out of town and they get to see their child play,” he said. “People tell me that they really love particular shows because of the people who are on there. Other people love the fact that we cover seasons worth of sports, and I always love when people contact us and say, ‘Oh, you should cover something. You should create a show about something.’ ”

In an ever-evolving digital world, the roles of community access stations are constantly changing. Cozzens believes that the key to success for stations like HCAM is to embrace the digital age — but more importantly, to embrace the people they serve.

“I think [HCAM is] so important to the town because video is so important in our culture. A community television station impacts all areas of that,” Cozzens said. “When I was running Westborough, it was run by a cable company. When I came to Hopkinton, it was a non-profit corporation, and the focus was so much more sharply defined on serving our community.”

HCAM is far from a one-man band, as Cozzens has a dedicated five-person staff at his aid. 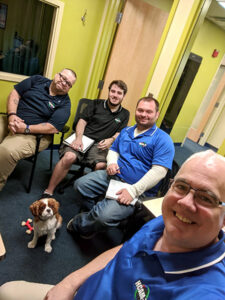 Among the full-time staff at HCAM are (from left) Mike Torosian, Matt Clark, Tom Nappi and Jim Cozzens. Missing is Bob Hamilton.

Mike Torosian is the station’s production coordinator, making sure that HCAM’s regularly scheduled programming is produced on time. News director Tom Nappi is the man in charge of HCAM News. Master control operator Matt Clark schedules the on-air programming and handles the station’s promotions, and Bob Hamilton is the point man for coordinating government meetings.

Unlike network stations, HCAM’s focus is twofold: entertaining and educating the viewer, in more ways than one.

HCAM offers a free, five-session series of workshops to learn about all aspects of television production for Hopkinton residents. Cozzens said the station is always happy to welcome new members to the team, both on and off camera.

Cozzens hopes that, in an increasingly divided world, HCAM can offer a way for people to come together, while having some fun along the way.

“I find not only is it exciting making television, but when we’re making local television, it’s really exciting too because we’re really impacting our community,” Cozzens said. “The one thing that really binds us is that everything is Hopkinton-centric.”