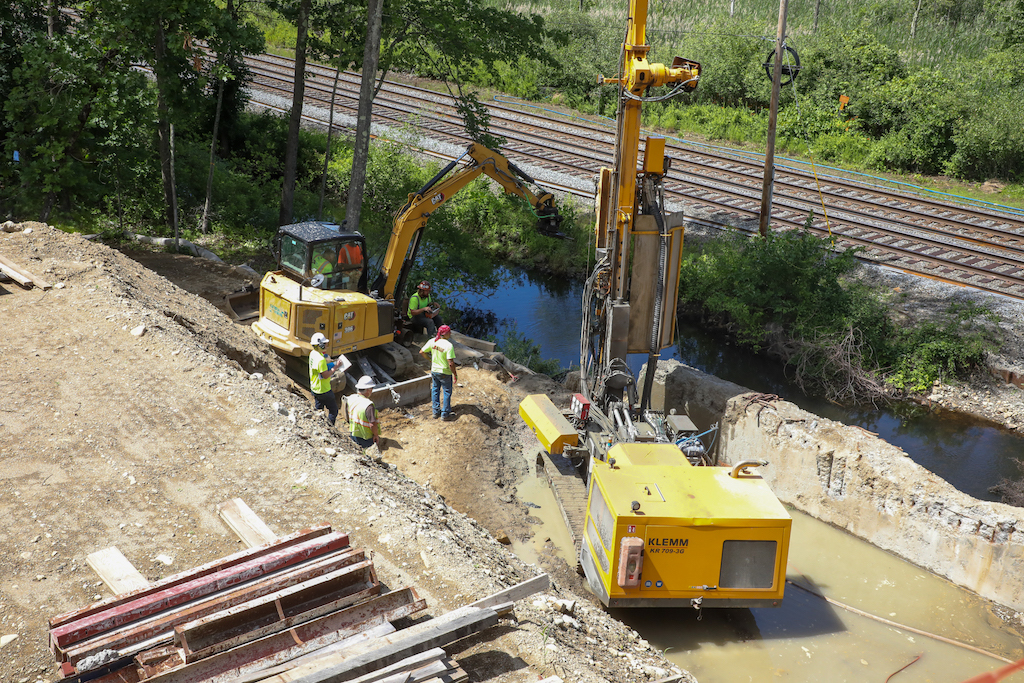 The Fruit Street bridge has been closed since February and will remain closed for a few more months, the Massachusetts Department of Transportation announced recently. PHOTO/JOHN CARDILLO

The Massachusetts Department of Transportation recently held a virtual meeting detailing the beginning of the construction phase in December of the remodeled interchange between Interstate 495 and Interstate 90, which straddles Hopkinton and Westborough.

As part of the project, one of Hopkinton’s two Fruit Street bridges is being reconstructed (the other also is being redesigned). The area currently is closed to traffic and will remain so for a few more months, MassDOT said.

The highway project is the first complete interstate-to-interstate interchange project the department has undertaken in its history.

“This is one of the largest projects that MassDOT has ever advertised for construction since its inception in 2009,” said Barry Lorion, MassDOT’s District 3 highway director for Central Massachusetts. The project’s radius is three-quarters of a mile from the interchange point.

Lorion explained that more than 200,000 vehicles pass by or through the interchange on an average day, which includes 50 percent of the state’s commercial traffic. The need for reconfiguration of the interchange arose after the removal of toll booths and the installation of the E-Z Pass electronic tolling system.

The goal of the nearly $300 million project is to alleviate what Lorion called “chronic congestion” and correct “substandard geometry” that currently contributes to crashes and rollovers on both roadways. The on-ramps and off-ramps will be lengthened to provide smoother access, and traffic no longer will have to weave through the old toll areas once the project is completed.

This was termed a design-build project because construction and design elements will happen simultaneously over the course of the next five years. There will be public meetings throughout the process, team members explained.

Said Lorion: “We will completely replace the interchange, and it will be unrecognizable from what you see today.”

VHB Design Manager Donald Cooke said construction will begin before the end of the year, with initial work on I-90’s on-ramps and off-ramps. Fiber optic cables will be moved from the median of I-90 to outside its westbound shoulder, as well as from I-495’s median from the MassPike to outside of I-495 southbound.

Cooke explained that the current lane configuration for each interstate will remain at three in each direction. A temporary lane will be installed during the construction period to help traffic flow. The number of lanes will not be increased by the project because of the close proximity of environmental resource areas, which include Whitehall Brook, wetlands and floodplains.

The bridges over Whitehall Brook in Hopkinton and the MBTA commuter rail station in Southborough will be completely replaced, he continued. There will be “minor horizontal and vertical changes” for the new single-lane ramps. Where the on-ramps and off-ramps converge, they will form double lanes.

I-495 northbound will be constructed in the existing median, Cooke pointed out, while the southbound side “essentially stays where it is now.” This allows space for the staging of traffic throughout the construction period. An auxiliary lane will be built northbound from the interchange to Route 9. There will be a new direct lane from I-495 northbound to I-90 eastbound.

A new loop ramp from I-495 southbound to I-90 eastbound is part of a two-lane offramp that will enter I-90 as a single-lane onramp.

“The Fruit Street bridge will be replaced in two major stages,” Cooke added, with work for the interchange project beginning in the next three to six months. There will be one alternating lane of traffic open during the construction period. Roadway and utility work are included in this project’s scope, as well as landscaping.

The upper part of the structure of Flanders Bridge in Westborough also is being replaced, Cooke noted.

During the question-and-answer period, Lorion clarified that there are two projects that involve Fruit Street. Separate from this project is the ongoing reconstruction of the second Fruit Street bridge.

One commuter to Hopkinton, George Allegrezza, noted the current steep incline at the merge point to get onto I-495 south. He explained there is a “very tight radius” to get into this incline and a narrow merge lane which is difficult for delivery trucks to navigate.

“Traffic following the trucks tends to pop out, move left one or two lanes, and accelerate quite rapidly up the hill,” he explained, hoping that the new configuration would address that issue.

Cooke explained that all of the radii for the ramps were very tight because people had to stop to pay their tolls manually.

“I could tell you with some confidence that every one of the ramps will have better radii more suited to the speed that people would like to drive — not high speed,” he said.

Because of the sheer traffic volume, this project will not include accelerated bridge replacement strategies because the bridges need to remain open. In urban projects, Cooke noted that a bridge could be shut down for a weekend for more rapid construction, but that is not feasible here.