Kennel hosts open house as it moves toward reopening 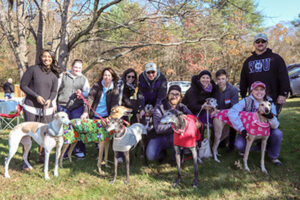 Greyhound owners show off their dogs during an open house at the Greyhound Friends facility in Hopkinton on Nov. 3.
PHOTO/CHRISTINE STRICKLAND

Greyhound Friends began a new chapter in its long and sometimes controversial history Nov. 3 with an open house at its updated facility that attracted about 200 visitors.

The facility at 167 Saddle Hill Road has been updated to “reflect the most current practices and standards,” according to the organization’s press release.

Kennels have been doubled in size, Shepard said. Hardware has been updated, fencing has been installed and fresh paint has been applied.

A number of visitors made financial donations or expressed interest in volunteering, Shepard said. The day’s activities included music, activities and the traditional Remembrance Ceremony for adopters to honor pets who have passed away since the last gathering.

Shepard said she especially enjoyed hearing from visitors who shared stories of the animals they were happy they adopted from the facility. In many cases, she said, “They want to adopt again.”

“The response has been fantastic,” Shepard said. “People are very excited, very supportive.”

The exact date the new facility will open is not certain, said Caryn-Amy Rose, president of Greyhound Friends Board of Directors. “We have to make sure we’re on stable footing” financially to go forward, she stated. Fundraising continues, and the organization is “almost to that point” of opening.

“Our job now is to make sure it does function effectively,” she said. “[Supporters] deserve that their good-faith donations should come to fruition.”

Greyhound Friends is ready to get back to its core mission of placing greyhounds in responsible, loving homes, Shepard said in the press release.

Although greyhound racetracks in Florida have begun to close, there still will be tracks in five states after the Florida dogs have been dispersed, and, “We intend to be here to find them excellent homes,” she said in the release.

Founded in 1983, the organization claims it has re-homed more than 10,000 dogs since its inception.

But Greyhound Friends has not been without controversy. Founder Louise Coleman was ousted two years ago after the kennel was closed by the state. However, the kennel was able to gets its license reinstated earlier this year following a turnover in leadership and a promise to keep the facility up to standards.

Shepard said she looks forward to a fresh start. “We listened to every complaint,” she said. “We definitely want to do it right.”

At a Select Board meeting on Sept. 10 in which the board, responding to a citizens’ petition opposing the reopening, discussed the kennel’s town license, Shepard said that Dr. Margo Roman, a veterinarian based in Hopkinton, would be releasing greyhounds from the 48-hour isolation required of dogs that come from out of state before they can be accepted by the organization.

However, Roman is on probation through April 2020 with the state’s Board of Registration of Veterinary Medicine for multiple alleged instances of misconduct.

Shepard said Roman offered to help the organization, but, “We are not going to accept it,’’ adding that Roman is “not now nor has she ever been” involved with Greyhound Friends. She said she made her comments to the Select Board “before other things came to light.”

Hopkinton resident Beth Gallagher Malloy, who has been an outspoken critic of the organization, said that “time will tell” what will happen to Greyhound Friends going forward.

But, she added, in light of past issues, “They’re going to be watched really closely.”