HHS senior runs so others can have water 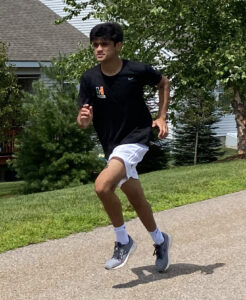 Aryan Shah committed to running 5 miles per day for 20 consecutive days as part of a fundraiser for a charity that helps provide water to people in need.

Growing up in Hopkinton, Aryan Shah has enjoyed many privileges that most people of the world are unable to experience. Following a conversation last year with his father, Jinal, the rising senior at Hopkinton High School began to take stock of the many blessings in his life and think about those who have less.

The teenager decided to do something about it, and he used one of his biggest passions as a way to make a difference. He ran.

Shah is a member of the HHS track and field team and a distance runner. Through his research, he found that there are about a billion people on the planet who have to walk, sometimes several miles, in order to get the water they need.

So Shah decided to run for water. He made a commitment to run 100 miles over 20 days, or 5 miles per day.

“First of all, I just love running,” he said. “But I also thought running for water would be a way of feeling what they feel.”

Shah ticked off 5 miles per day, usually averaging somewhere between six and seven minutes per mile and typically following a route near his Hopkinton home, though he said he tries to mix it up when possible. Mostly he ran by himself, but occasionally a friend joined him. Shah admitted there were days when it was more difficult than others to complete the 5 miles.

“It kind of starts out easy, but you’re supposed to take break days when you do long runs and I didn’t get to do that, so there were days when I was tired,” he said.

Shah did his running in May and June of 2020, in the midst of the first wave of COVID-19 infections in the state and with his spring track season canceled. In addition to raising more than $1,300 for charitywater.org, he was able to stay active in something that is outside and perfect for social distancing.

“It was something I could do to pass the time,” he said.

But the runs did a lot more than just pass the time. According to the charity, raising $1,300 was enough to help 33 people gain access to a lifetime supply of water through newly constructed wells. So Shah decided that the challenge would become an annual event.

“It showed me if I can do this every year, I can really chip in in a big way,” he said.

Shah is back running this year. Since the spring track season returned, he is now running during the summer months when he is not training for the Hillers. And people are joining him. Friends Josh Huang, Spencer Horgan, Matthew Burdulis and Srikar Ravi have pledged to raise money by running for water as well, and Shah’s cousin in London did a Bike for Water fundraiser.

Shah is inviting anyone interested in joining the cause to contact him via Instagram @runforwater77 or email at aryanjshah@gmail.com. He will be accepting donations through the end of the year at charitywater.org/aryan-shah/run-for-water-1.

Shah said he is happy that the conversation with his father has started something that has the potential to make a significant impact in people’s lives.

“I think he is really proud, he wants me to put myself out there and make a difference,” Shah said. “And other people want to take part. Everyone understands this is a good idea and they want to do their part.”