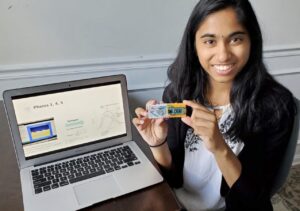 Archita Nemalikanti was awarded first place and the Massachusetts Chemistry & Technology Alliance Award as well as a WPI Scholarship for her chemistry project.

There’s a science behind the success of Hopkinton High School students who took first-place honors in the 2021 Massachusetts Science & Engineering Fair, also known as MSEF.

A formula of hard work, determination and passion for their projects has led to not only their recent success but also, they hope, continued work on their discoveries for years, maybe decades, to come.

Archita Nemalikanti, a junior, was awarded first place and the Massachusetts Chemistry & Technology Alliance Award as well as a WPI Scholarship for her chemistry project, “A Sensor to Non-Invasively Diagnose Neonatal Hemoglobinopathies.” 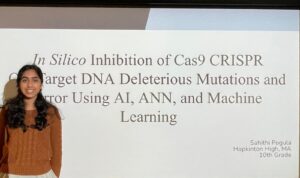 Sahithi Pogula was awarded first place and a Foundation Medicine Award for her biology project.

Pogula’s work involves study of CRISPR-Cas9 gene therapy. CRISPR Cas9 is gene-editing technology with great potential in drug discovery and disease prevention due to its ability to mitigate harmful genes and insert helpful ones.

Despite this, CRISPR Cas9 is not very accurate in identifying problem areas perfectly. Pogula’s work uses computer modeling to identify where these mistakes are likely to occur so that these mistakes can be fixed ahead of time.

Nemalikanti’s work developed a non-invasive sensor that can be used to determine whether infants have hemoglobin disorders, such as anemia, and displays the results on an app.

This process is less invasive, and as a result less stressful to the infant and parents, than taking blood from a vulnerable baby, she said. This work is a continuation of a project that she worked on last year that won her the Sanofi Genzyme grand prize award at the Massachusetts Science & Engineering Fair.

Nemalikanti hopes to continue this work into the future, with the goal of possibly developing a patent for a process that “can hopefully be used in real time.”

Pogula’s work involved reaching out to scientists who reviewed her research and provided insight. Having this level of professional involvement is very impressive, Nemalikanti said of her classmate’s achievements.

Pogula, a sophomore, hopes to expand her work “far into my life,” she said.

Nemalikanti, a junior, also would like to continue her work.

In the process of their projects, the students learned many lessons. Not all of them were about the subject of their studies.

Pogula, to her disappointment, found that female scientists, particularly in the field of gene editing, were relatively rare. In a directory of about 30-40 scientists, only two or three were females, she said.

The best way to improve these numbers, Nemalikanti said, is to “have science teachers who are truly passionate about science and who make the effort to get their students to fall in love with science.”

“Other women being there as role models for girls is definitely helpful,” Pogula said.

Both students said their Hopkinton High School teachers provide them with inspiration. “I am who I am today because of what I’ve learned,” Nemalikanti said.

Pogula said she sometimes spent 10 hours a week on her work, depending on her exams and other activities. To do that, she said, she needed to be inspired.

She wasn’t doing this strictly to enter a science fair, or for extra credit or to burnish a college application, she said. Finding something that interested her “pushed me to go to a different level,” she said.

Nemalikanti agrees. Developing a passion project “helps you find out who you really are, what excites you,” she said. “That’s why I love my research so much.”

HHS freshman Eva Bennet went on to compete in the Regeneron International Science and Engineering Fair and was awarded a Fourth Award in the Translational Medical Science category for her project, “Development of an innovative, alternative model for teratogenicity testing.”

“Several people close to me were born with birth defects,” Bennet explained. “During a discussion about the speed of COVID-19 vaccine development last summer, I learned about the requirement for testing medicines for their potential to cause birth defects before being given to pregnant women. Currently, these tests are conducted in pregnant mammals, which is expensive and takes a long time. This is what prompted me to develop an alternative new teratogenicity testing model using flatworms, that could be potentially paradigm shifting by reducing time, cost and mammalian animal use when fully validated.”

Said HHS science teacher Kristen Murphy: “We are so proud of Eva. Throughout this process she has demonstrated so many of the qualities of a successful scientist — intellectual curiosity, perseverance and a can-do attitude. Most of all, she is an excellent communicator and impressed judges with her ability to explain her process and the potential impact of this research.”