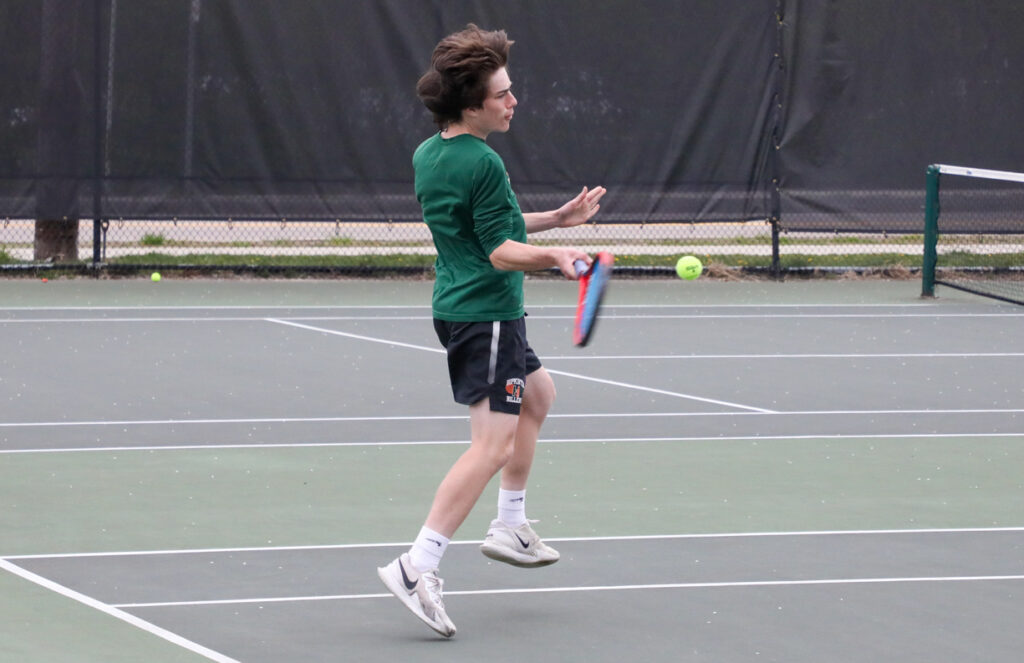 The Hopkinton High School boys tennis team captured a Tri-Valley League Large School Division championship this season, but the Hillers have their sights set on making their presence felt during June’s state tournament.

“We are certainly hoping to make a run,” coach Mike Miller said. “There are going to be some good teams in the tournament and we know we have to bring our ‘A’ game every time we play. We have some depth and we are hoping we can work through the first couple of rounds and, after that, it comes down to who is playing their best tennis at the right time.”

Hopkinton ran through the TVL Large undefeated and went 11-1 in the league overall. The team has been anchored by performances that have been nothing short of dominant. Top singles player Lex Kaye won nearly every match this spring.

“He has been dominating just about everybody in the league,” Miller said.

The top doubles duo of Spencer “Spoon” Smith and Rishit Shekhar also posted a near-undefeated season. Adam Glace has held down the No. 2 singles spot for most of the spring, while some of the other spots have been up in the air at times due to injuries and players in COVID-19 protocol.

Pranav Kapur has been the primary third singles player and lost only once in TVL competition. The second doubles tandem of T.J. Weeden and Andrew Palacios has had a great deal of success for the top-tier team. Miller said he expects Sooraj Sambasivam to play a significant role heading into the postseason.

The Hillers’ work ethic is what has allowed them to succeed this year, their coach said.

“You always want to see that spirit, guys who are just going after it and don’t want to lose,” he said. “They are all working harder to get themselves into the lineup, and that makes us better as a team as well.”

In one of Hopkinton’s final matches of the regular season, the Hillers earned a 4-1 victory over a strong Algonquin squad. It’s the kind of match Miller was happy to see right before the tournament.

“We got pushed in some spots, it was a high-intensity match,” he said. “Going into the playoffs it was nice to have something like that under our belt.”

Hopkinton is a top-10 team in the state in Division 2 and should be able to use the high ranking to earn home court advantage in the early rounds of the tournament, should the Hillers advance. Miller noted that perennial powerhouses like Westborough and Concord-Carlisle also are at the top of the rankings.

“These are historically strong programs,” he said. “It’s fun just to get in, and we will certainly try to do some damage once we get in there.”