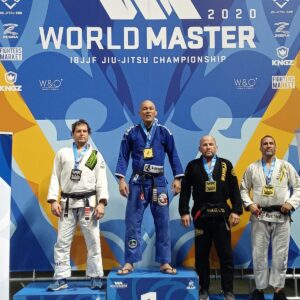 Carlos Terrinha was a 19-year-old living in Brazil and working a delivery job when he stumbled upon the martial art known as Brazilian jiu jitsu. Next door to a spot where he was making a delivery, he noticed a gym with some practitioners of the close-combat art.

“I kind of stuck my nose in to see what was going on inside the gym,” Terrinha said. “The teacher saw me and he asked if I wanted to train.”

Terrinha said no. He had his deliveries to make. But it wasn’t long before he stopped by again and watched a class. Then he signed up to train. Within three months, he was competing in his first tournament as a white belt.

That was in 1989, and he has not stopped competing ever since.

In December, Terrinha competed in the International Brazilian Jiu-Jitsu Federation’s Master World Championships and came in first in his division. It’s the sixth world championship he has won in his career. Terrinha also has won six European titles and is a 17-time Pan-American champion. It was the latter competition that first brought him to the United States.

In 2001, Terrinha competed in Kissimmee, Florida, through a Brazilian sponsor. He placed first in his division and second in the open class.

“During my two-week stay in America, I fell in love with the culture here,” Terrinha said. He went on to secure a visa and moved to America in 2003. Terrinha became a citizen in 2013. In 2017, he opened Hopkinton Terrinha Draculino Team (TDT) Brazilian Jiu Jitsu on Elm Street. There are affiliate gyms in Lowell, Salem, Nantucket and Lincoln, Rhode Island.

Terrinha competes a little less these days than in past years. There was a time when he would be taking part in about 10 tournaments per year, but that has dropped to three or four. His main focus is on teaching and working with his roofing company. Terrinha says he is trying to show his students how beneficial jiu jitsu can be for their lives.

“They get in good shape, but it’s more than that,” he said.

Practicing jiu jitsu has helped his students gain strength, flexibility and stamina, and provides an outlet for releasing stress, he said.

“The other thing that happens is some of my students, they never thought about competing in their life,” Terrinha added. “Then they start to compete and they go to tournaments and they start to feel more confident in themselves.”

And some of those students, like their teacher, are beginning to add to their trophy cases. Dilor Pacheco is a top-ranked white belt in the IBJFF. Cleber de Sousa, another of Terrinha’s pupils, is a champion in the No Gi Division, meaning gripping without the traditional martial arts uniform (called a gi).

Terrinha is hopeful the sport can have even a fraction of the impact on the lives of his students that it has had on his own.

“If it were not for BJJ, I would not be in the United States today,” he said. “BJJ changed my life a lot, it gave me a different perspective.”

It also has allowed him to see the world, traveling from Canada to Portugal to California and many places in between. They are all experiences he wants to pass along to local practitioners in Hopkinton.

“If people don’t have any challenges, they don’t move forward,” Terrinha said. “Sometimes challenges in life help you change your life. I tell my students to sign up for tournaments, go compete and have fun. You’re going to see something out of your comfort zone.”