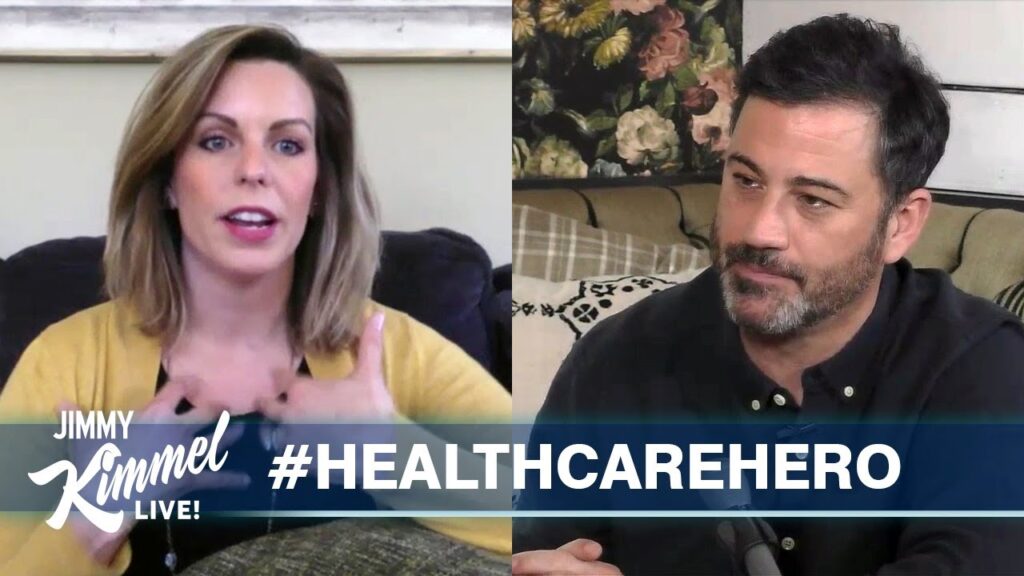 Taylor Chace-Myers (left) was honored by talk show host Jimmy Kimmel and given a $10,000 gift for her work as a nurse at Boston’s Beth Israel Deaconess Medical Center.

April 7 started out like a normal day — well, the new normal, during the pandemic — for Hopkinton native Taylor Chace-Myers.

An ICU nurse at Beth Israel Deaconess Medical Center in Boston, Chace-Myers works the overnight shift (7 p.m. to 7 a.m.) at the hospital. On that morning Chace-Myers received a text message from a fellow nurse, telling her to expect a phone call from the producers of “Jimmy Kimmel Live!” Chace-Myers had been chosen as the show’s #HealthCareHero after her coworker, who had been contacted by one of the show’s producers, nominated her.

“Literally all this comes out of nowhere, so I was like, ‘What? What’s going on?’ ” Chace-Myers recalled. “She explained that they have been doing this appreciation weekly to help health care workers around the nation, they’re interviewing the frontline workers on this.

“So I talked to the producers of ‘Jimmy Kimmel.’ I was super nervous, I’m not like a spotlight person. But I was like, ‘You know what, this is a once-in-a-lifetime thing. I really want to represent Boston and my hospital and my coworkers and stuff, so I’m going to do it.’ ”

Chace-Myers did not have much time to prepare, as the taping was scheduled for just after 5 p.m. that same day.

“In the afternoon they reached out to me and and I talked to IT, they helped me set up my computer for the TV and the lighting in my house,” she said. “This was all kind of makeshift — I had to put lamps behind the computer. Then they prepped me for some of the questions, did a pre-interview to see about my background.”

After graduating Hopkinton High School in 2003, Chace-Myers got her nursing degree from Northeastern and has worked at Beth Israel ever since, currently in the cardiovascular ICU unit.

The mother of a 3-year-old boy (Quinn) and an 18-month girl (Sawyer), Chace-Myers splits child care duties with her husband, Tom, who is deputy general counsel for the Department of Early Education and Care. The family lives in Hamilton, on the North Shore.

Chace-Myers shared her story with Kimmel and talked about the challenge of working at a hospital during the pandemic.

Kimmel offered thanks and then announced she would receive a gift of $10,000, which Chace-Myers had no idea was coming.

“No, I did not know that until he said it on the actual show, during the interview,” she said. “I was like, ‘Oh my god.’ It was pretty much like a blackout moment, like, ‘Did he really just say that?’ ”

Kimmel also said the coffeemaker Lavazza would donate 4,500 bags of coffee for the staffers at Beth Israel.

After the interview aired that night, Chace-Myers received congratulations and words of support from friends, family and strangers.

“I’ve heard from a lot of people,” she said. “Honestly, it’s so kind and appreciated. Just a lot of kind words. It helps get through such a tough situation. Everyone’s been really kind and sweet.

“It’s kind of been a whirlwind.”

Chace-Myers was especially pleased to represent her family, which has a long history of working in the medical profession. Her parents watched the interview from their home in Florida, where they spend part of the year.

“They were so proud,” she said. “They were so taken aback, so happy that all of our hard work is being thanked. My mom is a retired nurse, I’m a nurse and my sister’s a physician. … Being in the health care field, sometimes it takes such a big crisis, like a pandemic or the Boston Marathon bombing or something to see that we do put our patients and our families first.”

Chace-Myers also hopes the appearance will raise awareness for the need for more personal protective equipment (PPE) at hospitals. Her sister, Constance, a physician in San Diego, helped start a non-profit organization called FrontlinePPENow (frontlineppenow.org) last month to advocate and raise funds for more PPE for all the health care workers.

Chace-Myers also has her own family to worry about — something that’s especially challenging considering her exposure to patients who have the virus.

“The biggest thing we’re doing obviously is social distancing, we’re not seeing anyone,” she said. “I bring a separate pair of clothes and change at the hospital after my shift, wipe down everything I can with wipes, come into the house and have my husband semi-quarantine the kids in the playroom — hold them off, let me come in, I go to the laundry and put all of my work clothes in there immediately, and then book it to the shower, take a shower, then I go out to see the kids. Nothing is foolproof, but that’s what most health care workers have been doing.”

Going home to her family is something that drives Chace-Myers, especially after she has seen firsthand the challenges for families whose loved ones have been stricken with COVID-19.

“I can’t even imagine being a patient or a family member,” she said. “It breaks my heart every shift, they’re so isolated. There’s no family in the hospital. We try to do FaceTime so the family can feel like they still see them. You’re kind of like the glue that lets them know their loved one is taken care of. It’s nice to have that appreciation on the other side, because I don’t think it’s always the case.”