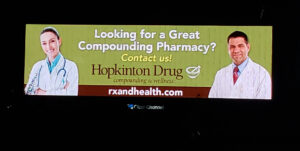 By Thursday night, the Hopkinton Drug advertisement on a Route 9 billboard in Westborough no longer mentioned ivermectin. PHOTO/HOPKINTON INDEPENDENT

Hopkinton Drug has generated some publicity for a billboard advertisement the Main Street business had been running on Route 9 in Westborough, but it’s likely not the kind of attention the company sought.

The advertisement, which was replaced earlier this week, read: “We have an ample supply of human ivermectin,” followed by, “Available for compounding.”

Ivermectin is a “broad spectrum anti-parasitic agent,” as defined by the World Health Organization (WHO), that many people are taking because they believe it will help in the fight against COVID-19, although it has not been approved for such treatment.

Hopkinton Health Director Shaun McAuliffe was flabbergasted by Hopkinton Drug’s decision to promote ivermectin. He said he dropped the pen he was holding in shock when he heard about the ad.

“It’s insane that people are even considering this,” he said. “It’s an off-label use, which is against everything their compounding license and their pharmacy license stands for. If I were to promote ivermectin, I would be in violation of my sanitary license. Physicians who recommend it should be having their medical licenses suspended.”

It was especially disappointing to McAuliffe considering the efforts by his department to make Hopkinton one of the most respected towns in the state for its COVID response.

“For all the work we’ve done and the education we’ve provided to get to where we are, to have a fairly well-respected pharmacy advertising this product in that manner — it wasn’t done by accident — and the thought that they might be taking advantage of uninformed residents of the commonwealth, it makes me ill. It makes me sad. I see it as kind of a blemish on the town’s reputation. It just kind of detracts from all of our success.”

McAuliffe said he reached out to the local Food and Drug Administration (FDA) office and was told the case was being referred to the state attorney general for possible legal action. Meanwhile, McAuliffe said, the Department of Public Health asked Hopkinton Drug to remove the ad.

According to the FDA website, “The FDA has not authorized or approved ivermectin for use in preventing or treating COVID-19 in humans or animals. Ivermectin is approved for human use to treat infections caused by some parasitic worms and head lice and skin conditions like rosacea.”

Ivermectin’s popularity soared following rumors that it could help in the fight against COVID. According to the Centers for Disease Control and Prevention (CDC), prescriptions nationwide for ivermectin jumped from an average of 3,600 per week in the year leading up to March 2020, when the pandemic took hold, to more than 88,000 in the week ending Aug. 13 of this year.

The FDA indicated that it is running clinical trials to assess ivermectin tablets’ effectiveness in the prevention or treatment of coronavirus, but, “Currently available data do not show ivermectin is effective against COVID-19.”

The WHO concurred, writing in March: “The current evidence on the use of ivermectin to treat COVID-19 patients is inconclusive. Until more data is available, WHO recommends that the drug only be used within clinical trials.”

There have been numerous reports of people becoming ill from taking animal ivermectin, which is designed to treat or prevent parasites in livestock. Those medicines are prepared differently — in much more concentrated forms — from the human version that Hopkinton Drug is advertising. Additionally, the FDA states that “many inactive ingredients found in products for animals aren’t evaluated for use in people. Or they are included in much greater quantity than those used in people. In some cases, we don’t know how those inactive ingredients will affect how ivermectin is absorbed in the human body.”

A request for comment from Hopkinton Drug went unanswered.