During an emergency meeting Tuesday night to address Thursday’s planned rally to “demand answers” regarding the death of Hopkinton teenager Mikayla Miller, the Select Board met for an hour in private executive session to discuss security measures with Police Chief Joseph Bennett. Middlesex District Attorney Marian Ryan later joined the public portion of the meeting, and she repeated details of the investigation that she shared three hours earlier at a press conference in Woburn. Select Board chair Brendan Tedstone told Ryan he hoped that her explanation would quiet those who have claimed both that Miller was “murdered” and that investigators have not done due diligence.

At Ryan’s press conference, she provided key details regarding the investigation, while stressing that her office’s investigation has not been completed and “no final conclusions have yet been reached.” Said Ryan: “Let me also speak to the calls and questions that we have appropriately received from concerned citizens regarding the notion that this office has in some way  neglected Mikayla’s case or worse — so much worse — is engaged in some sort of cover-up because Mikayla was Black or because she was a member of the LBGTQIA community. That is patently false.”

Residents got a Town Meeting primer Monday night via the ninth annual Know Your Vote forum sponsored by eHop and broadcast on HCAM. The nearly two-hour event featured a number of town officials and board members who explained the most crucial articles for Annual Town Meeting and Special Town Meeting, both of which will take place Saturday beginning at 9 a.m. under a tent at the high school’s football field.

The Hopkinton Sustainable Green Committee is springing forward with a number of initiatives to protect the town’s environmental health and educate the public how to safeguard resources. The group originally formed in 2008, but vice chair Rebeka Hoffman said it was reborn in late 2019 after years of inactivity.

Project Just Because is hosting another free food distribution day on Saturday, May 15, at its Hopkinton facility for all Massachusetts residents in need. Anyone needing assistance or aware of someone who needs help with food — including protein, dairy, dry goods, bakery and gluten-free options — can stop by 109 South St. and select free items between 11 a.m. and 1 p.m.

Photo of the Day: A crew from WCVB-TV set up in front of the Hopkinton Police Station to report on the Mikayla Miller story Tuesday. 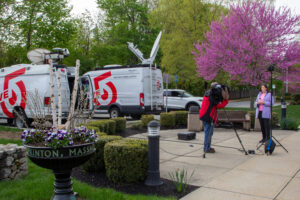