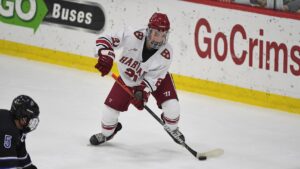 Sean Farrell will take a break from his season at Harvard University in order to compete for Team USA in next month’s Winter Olympics in Beijing. PHOTO/HARVARD UNIVERSITY

Sean Farrell has been a high school hockey standout, an NHL draftee, and a Division 1 collegiate star. Now the Hopkinton native will be called an Olympian.

The 20-year-old was named to the U.S. men’s hockey team for the Winter Olympic Games taking place next month in Beijing.

“It’s unbelievable, playing in the Olympics is so crazy and such a once-in-a-lifetime experience,” Farrell said. “I had an idea that it might be a possibility, but when my coach called me and told me it was official it was really special.”

The roster was revealed on Jan 13. Farrell said he called his parents, Erica and Bill, after hearing the news several days earlier, and the three of them shared an emotional moment.

“We were all crying on the phone together,” he said. “It’s really special for my family and something they have put so much effort into, helping me realize my goals and dreams as a hockey player.”

For most of the year, it did not appear that amateurs like Farrell would have a chance to compete in Beijing, with the NHL slated to send its players. But when the NHL pulled out, it opened the door for Farrell, who is in the midst of his first season playing at Harvard. Farrell is set to fly from Boston to Los Angeles on Jan. 30 before making the trek to China.

“It’s obviously an odd time with COVID and everything going on in the world, so the main thing we have been told is that it’s going to be very structured and strict with mask requirements and making sure everyone is staying healthy,” Farrell said. “I think that’s the main goal, to get everyone there safe and healthy and stay healthy.”

But he has let his mind wander to the possibility of winning a medal, perhaps even a gold. Without the top pros in attendance, he said the European teams figure to be pretty strong, including Russia, which will have a team stacked with players from the Kontinental Hockey League. Perhaps harkening back to the Miracle on Ice in 1980, the Russian pros will face a young American roster.

Winning a gold medal, he added, would be a “dream come true,” but the path to the podium would not be easy.

“It’s going to take a lot of effort from everyone every single day to complete that goal,” he said “Once we get to Los Angeles that journey starts and we are going to have to do everything the right way to compete.”

Through Harvard’s first 13 games this season, Farrell scored eight goals and added 11 assists. Last year, he earned Player of the Year honors in the United States Hockey League, the nation’s top junior league, after recording 101 points (29 goals, 72 assists) in 53 games with the Chicago Steel. The Montreal Canadiens drafted him in the fourth round of the 2020 NHL draft.

Farrell has been part of the U.S. National Team Development Program and competed in the 2018 Under-18 World Championships, winning a bronze medal with Team USA. He said that even though the focus will be on winning, he is excited to take in as much as he can during his time in Beijing.

“It will be exciting with the activities in the village and all of the sports going on,” Farrell said. “We will definitely try to take in as much as we can and enjoy the experience of being at the Olympics.”

← DPW: Recycling center closed Saturday due to expected storm Letter to the Editor: Adding holidays to school calendar can put strain on families →