A big emphasis has been placed on social emotional learning lately, with schools realizing the importance of developing more well-rounded children and addressing mental health concerns as early as possible.

Hopkinton’s Jessica Beattie has been on the forefront of this movement, and due in large part to such efforts she recently was named the Paul J. Hunter Assistant Principal of the Year by the Massachusetts School Administrators’ Association for her work at the Robert Adams Middle School in Holliston.

After being nominated, Beattie had to provide written information about her job and accomplishments, then, after being selected as a finalist, go through interviews with current and former administrators.

“I was very excited to be chosen, but the process was nerve-wracking,” she said. “I’m not a person that toots my own horn by any means, so it’s hard to self-promote, especially when I feel that much of my success is due to all the teachers around me. My building is not going to be successful if I don’t have great staff and students that want to do well and a community behind me that wants to support their students and support their teachers to do really well.

“So to me it was really humbling, but also, I said to my staff when they named me — everybody was so excited for me, which is great — but I said, ‘I really owe it all to you. Without you guys I wouldn’t be in the position I am in.’ ” 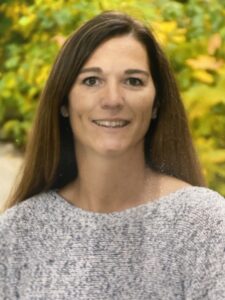 “Both of them really pushed me to get into administration and have continued to kind of mentor me through this entire process,” she said. “I do owe a lot to those two administrators.”
Jordan was effusive in his praise of his co-worker.

“Mrs. Beattie is the most dedicated educator I have been around in my career,” he stated. “She is thoughtful, compassionate, hard-working, and creative. Additionally, she has an ability to work through some of the most complex problems in education in ways that show an acute awareness of family and student needs, and public school realities. On a personal level, she is joyful, humorous, and kind, making those around her feel appreciated, validated and respected.”

Beattie (nee Kinney), grew up in Hopkinton, and she said she had her own issues when she was a student. That played a role in her decision to focus on the social emotional aspect of learning.

“I just have a passion for helping kids with social emotional growth,” she said. “I always struggled in school as a kid. That was something I really, really had a passion for, was helping those kids who didn’t feel like they had a voice, or felt like they were struggling and couldn’t find their way out.”

After getting a sociology degree from Framingham State and while studying for her master’s in social work from Boston College, Beattie spent two years working at a residential facility in Worcester, which she called “eye-opening relative to student trauma.”

She then landed a job at the middle school in Holliston as an adjustment counselor.

“They kind of approached me with this idea and said they would like to try to maintain more students in their district so that they don’t feel so ostracized and they can be with their peers and kids they’ve grown up with, so how do we do that?” Beattie recalled. “We created a model that essentially was a whole program within a building where the students could integrate into general ed classes but they had the flexibility to stay in my program as often and as much as they needed, with the thought we’ve always had, and still do to this day, is it’s not intended to be a room where kids stay all the time, because less restrictive is best. That’s in all data. We want kids to be able to learn the strategies and interventions and then apply them within a general ed setting to be with their peers. Because being with peers who can also model for the struggling students is what’s going to get those struggling students to learn as well.

“So I opened a program there for students who would be sent out of district for social emotional struggles. I led the program as a social worker and I had a special ed teacher with me. We kept many kids in district, and other districts were sending their kids to us, which was great. We grew that program, which is now in every building in the district.”

Beattie then became a guidance counselor for almost 14 years before taking the job as assistant principal four years ago.

Looking ahead, Beattie said she would consider seeking employment in the Hopkinton Public Schools, but only after her two children have graduated. She’d also be happy remaining in Holliston.

“I would love to continue to make progress in the building I’m in,” she said. “I have no thoughts on leaving anytime soon. I really love the Holliston community. My desire would be to either become the principal of that building or work at some level as a social emotional director of the Holliston school district or another school district, just aligning social emotional support for students across a district. Given the pandemic, I think it’s even more important to have a position that way. This helps students understand the trauma they’ve endured in this pandemic and the regression that every student is really facing at this point, and how important it is to help teachers feel solid in that area and help students grow.

“I say to my teachers all the time, if we’re not helping the whole child then we’re not really helping the child at all. Because they can’t learn academic skills if they don’t know how to make good choices and they’re not solidly grounded in their own emotional state. That’s my real passion. But I love what I’m doing. I think the harder thing for me to go to a top district level would be my lack of connection with students. I just love being in a building and having the kids around me. It pushes my desire.”

“Lou is an absolutely indispensable part of our department and our school,” Cormier stated. “Personally, Lou has helped me tremendously in my two years as we’ve navigated the challenges associated with EEE [Eastern equine encephalitis] and the pandemic during that time.

“Lou works tirelessly behind the scenes, often working well beyond her required hours, yet never wants any of the credit. She is kind, professional and personable in every interaction which has resulted in earning the utmost respect from students, families, coaches and administration.”