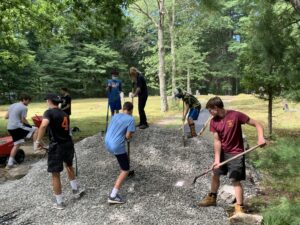 Ronnie Shamus (right) and friends work to spread gravel onto a new path at the Wilson Street Cemetery earlier this fall. PHOTO/SHAMUS FAMILY

When Ronnie Shamus first set eyes on St. John’s Wilson Street Cemetery, it was, as he described it, “in complete disarray.” A year later, the burial ground has been given new life.

It was almost a year ago when Shamus, now a Hopkinton High School senior, was looking for a challenge as part of his Eagle Scout project. He checked in with his pastor at St. John the Evangelist, but Father Richard Cannon couldn’t immediately come up with any ideas.

“I wanted to do something for St. John’s because I had been going there forever and I always had an idea in my mind that I wanted to give back to the St. John’s community and Father Cannon,” Shamus said. “So when I asked him what projects he might have around the church, he couldn’t really think of anything. We started going down the list of things they had on their agenda for the year, what they wanted to get done. Wilson Street Cemetery had always been something that they wanted to get to but never had the time or the budget to do it. So he suggested that. He thought that it might be too big a project for me, but I decided to take it on anyways.”

According to various historical accounts, an influx of Irish immigrants to Hopkinton in the mid-1800s led to the creation of a Catholic church (St. Malachi’s, which had been located on Cedar Street, across from what is now the U.S. Post Office) and the purchase of 2 acres of land on Wilson Street for a cemetery. In the ensuing years, as more and more Irish arrived, a larger church — St. John the Evangelist, which still exists on Church Street — was constructed and a larger cemetery was created on Mount Auburn Street. The last burial at the “Old Catholic Cemetery” on Wilson Street is believed to have taken place 100 years ago, and the area had fallen into neglect.

There have been a couple of previous Eagle Scout projects at the grounds, but overall the cemetery remained in less-than-ideal condition, with a small, often-muddy parking area, no defined walking path, and little explanation of who was buried there.

“If you go over there you see random rocks placed all over the place,” said Shamus, who has Irish heritage. “The Irish-Americans had no money, so when someone would die they would just dig the hole, put them in there, cover it up and place a piece of granite as the headstone. So there are a lot of unmarked graves there and no way of knowing who is in there.

“Where you see the walkway now, we stripped a full layer of topsoil off in order to lay base stone. One of our concerns was that we were going to stumble upon someone who was buried there, because there was really no way of knowing where some of these people were buried. So we had to be really careful about that before we started digging.” 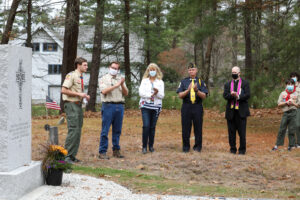 Shamus’ interest in the cemetery was piqued when he found out that some Civil War veterans were buried there. One in particular turned out to be especially interesting.

“I was doing a little bit of research at the beginning of the project about the cemetery as a whole. There wasn’t that much information about the people buried there,” Shamus said. “My next-door neighbor was there with me one time and he pointed to a stone and said that it was a kid who was killed in Gettysburg, so I looked more into it.”

The “kid” was 19-year-old Thomas Fetherston, a Hopkinton resident who was a member of the 11th Massachusetts Volunteer Infantry Regiment, which suffered heavy casualties during the second day of the Battle of Gettysburg, on July 3, 1863.

This past summer Shamus and his parents rented a motor home to drive to a baseball tournament in Georgia (Shamus is captain of the baseball and hockey teams at HHS). On their way, they stopped at Gettysburg and told their tour guide about the Union soldier from Hopkinton.

“The guide ran in the back, came back and said, ‘I know exactly where he was and approximately where he was killed,’ ” recalled Ronnie’s father, Ron, who also serves as Hopkinton Troop 4 committee chair. “He weaved it into the story [of Gettysburg], and it was a fascinating tour, because it was now connected to his Eagle project. It sort of made it all come to life.”

Added Ronnie: “He ended up taking us to the exact spot where [Fetherston] was killed, and there’s a monument there for his regiment with the names of those who died there. His name is there in Gettysburg. I thought it was really interesting how a small cemetery in Hopkinton could be connected to such a large piece of history.”

With extra motivation after he returned to Hopkinton, Shamus continued to work on the cemetery in preparation for a rededication during the town’s Veterans Day ceremonies. In addition to creating a walkway and parking lot, Shamus — with guidance and assistance from American Legion Post 202 adjutant (and stonemason) Mike Whalen — arranged for the placement of two new monuments. A tall one in the middle of the grounds features a Celtic cross and recognizes those buried there, and a smaller one placed on a carved-out area of a huge stone pays tribute to the veterans.

While Shamus and his father performed the majority of the work, assistance came from Shamus’ fellow scouts in Troop 4 as well as HHS hockey teammates Dan Kirk and Will Quinlan. Ackerman Monument in Holliston and Swenson Granite provided materials and carving for the monuments at a discounted price. McIntyre Loam and Rosado & Sons Landscaping donated materials and helped fix up the grounds. The Knights of Columbus provided financial support.

On Nov. 11, in the culmination of his year-long efforts, Shamus spoke about his project during the Veterans Day ceremony at the renovated grounds, and Father Cannon performed a blessing.

“I knew it was going to be a lot of work, but I didn’t quite comprehend how much work it was going to be,” Shamus said. “I took it on because I wanted to give back to Father Cannon and the church and all those buried there. It ended up being a lot more work than I thought it was going to be, but it turned out much better than I was actually expecting.”

Added Ronnie’s father: “It was a worthwhile project for him. We have some projects that only last a day or a few days. This one will have a lasting impact.”

Hopkinton-based Project Just Because has taken on new significance this year as the pandemic has left many people out of work and unable to afford necessities. In addition to providing food, clothing, toiletries and other items to residents and other Massachusetts families in need, the South Street charity annually has a holiday drive. This year the organization is aiming for 15,000 gifts to provide to struggling families before the end of the year.

“This has been an unbelievable year,” said PJB program manager Cyndi Beale. “It’s just been so crazy because of what’s been going on with COVID and all the layoffs. Requests have been quadruple what we usually get.”

Beale noted that another challenge is that PJB has to limit volunteers due to the pandemic, making it difficult to fulfill requests. While volunteering on site is restricted, people can still assist with delivery or pickup by driving to locations in the area. There are other volunteer options on the website as well.

Those looking to donate are encouraged to check the PJB website and use its Amazon wish list.

Congratulations to Hopkinton residents Donna Tamagno, Mark Haggerty and Eileen Ryan, who were among the volunteers recently honored for more than 500 hours of service to Milford Regional Medical Center. Each of the volunteers was awarded a commemorative pin.

Milford Regional has a total of 396 volunteers serving in over 40 different roles and departments throughout the Medical Center, averaging about 548 hours per week supporting patients and staff.