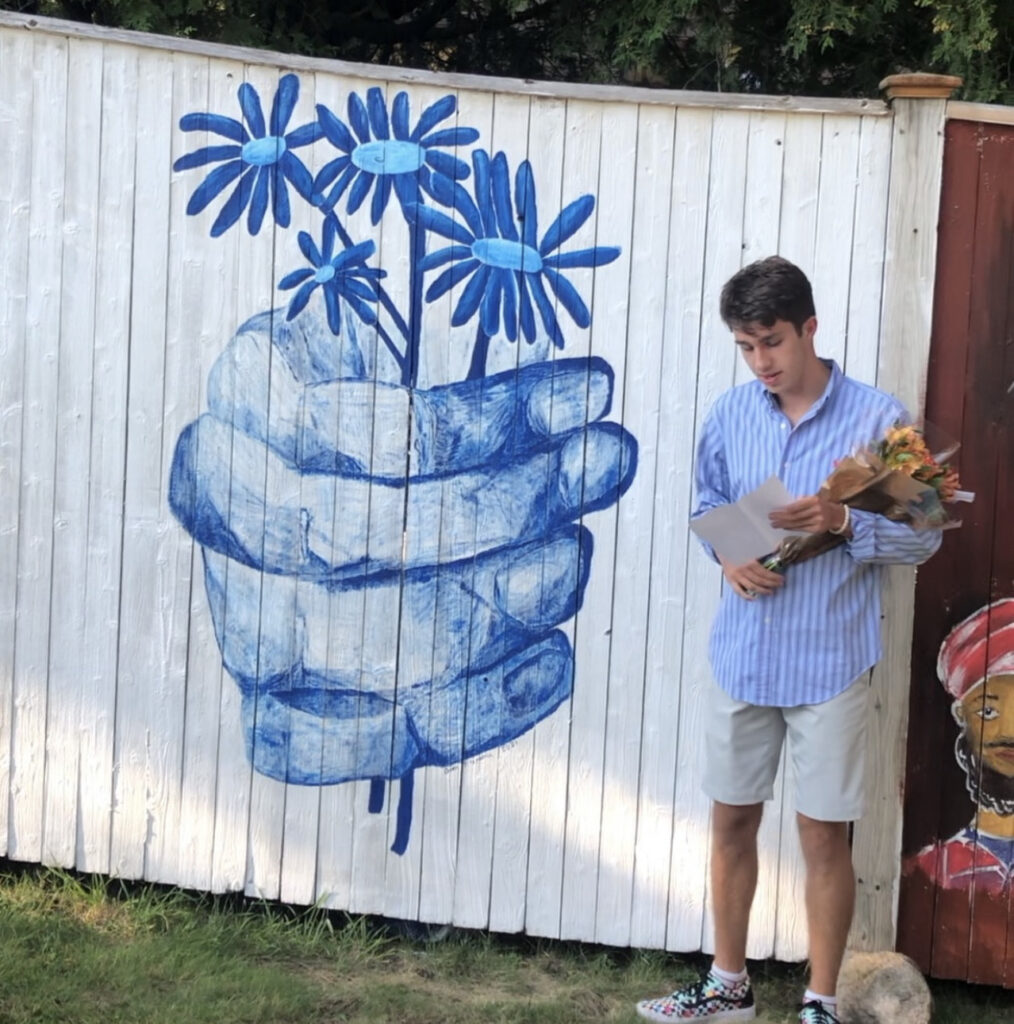 Owen Fitzpatrick, shown standing in front of the mural he painted last year on the fence leading to EMC Park, is looking for people to participate in the mural he’s putting together this year.

For his contribution to the series of murals along the fence leading to EMC Park, Hopkinton High School senior Owen Fitzpatrick is looking for the community to lend a hand — in more ways than one.

Fitzpatrick’s mural (part of the Hopkinton Cultural Council Diversity Mural Project) will feature the phrase “We’ve got your back,” and he wants to surround the words with handprints from residents. Some members of the Hopkinton Police Department already have said they will participate, Fitzpatrick said.

His hope is to get everyone working together to eliminate hate and divisiveness.

“I have been deeply troubled by the racist and homophobic transgressions in our schools and in our world,” he stated. “Further, I cannot begin to imagine the soul-grinding sadness and loneliness that drove two LGBTQ+ students of color in our town to take their own lives. Together, as a community, I believe we can make a loud statement of support on this simple piece of fence. When people drive by, I hope this piece will make them feel less alone. I hope the participants will be reminded that they took an active stand against hate in our town.”

Fitzpatrick said the phrase he chose was inspired by his grandfather.

“My grandfather is a man of many sayings,” he said. “His quips cover pretty much everything from good parking spaces to hard work, and they just stick in your head sometimes. One of my favorites is, ‘People support that which they help create.’ So my idea was to get more people involved in the Diversity Mural Project.”

The painting/handprinting is scheduled to take place on Saturday, Aug. 6, from 10 a.m.-noon. Rain date is the following day.

Fitzpatrick, who first started developing an interest in art in the sixth grade, also is an award-winning writer and a standout track and field athlete. And in June he was one of two Hopkinton students (along with Chris Holly) to attend Massachusetts Boys State at Stonehill College, a weeklong leadership program for which he had won the Samsung American Legion Scholarship Award.

“Going to Boys State was an incredible opportunity,” Fitzpatrick said. “I met lots of awesome, like-minded kids who were both fun to hang out with and spend time getting involved in having a better understanding of how our government works, our democracy. I thought it was really eye-opening. If you try to run for a state position or if you have friends going for a state position it surprised me how pumped up and just so active everyone was in it. It was really great for Chris and I to represent the town of Hopkinton.”

Electric Youth, the teenage song-and-dance troupe based at the Franklin School for the Performing Arts, returned to the Hopkinton Town Common on July 31 as part of the Concerts on the Common series.

It was a homecoming for the group’s two Hopkinton residents, Finley Doherty and Erin Belger.

Doherty, who is entering her junior year at Mount St. Charles Academy in Rhode Island, performed with Electric Youth last year, including last year’s Town Common appearance. Belger, a rising senior at Hopkinton High School, is new to the group.

“It’s so nice to be performing and doing what I love in front of the town where I grew up,” said Doherty, who started appearing in Enter Stage Left productions in the fourth grade.

Doherty said she enjoys singing, dancing and acting — all three of which she gets to do at the Franklin School for the Performing Arts — but singing is her favorite and something she hopes to continue to do as she gets older.

In the meantime, she is enjoying the variety of music she gets to perform as part of her group.

“Electric Youth provides a lot of different genres of music, such as pop and rock and [rhythm and blues],” Doherty said. “So you get a mix of different songs and genres.”

“It just kind of feels like our anthem and our main theme song for the group,” she said.

Electric Youth, which is backed by the eight-piece Boston Show Band, recently completed its annual European tour, which this year included performances in Belgium, France, Switzerland and Italy.

The highlight was the tour finale in the town of Menaggio, Italy, on the shores of Lake Como.

“We did two performances there and the crowd was so big and it was a beautiful venue,” she recalled. “As a group, for all 14 of us, that was definitely some of our favorite shows. It’s just an amazing opportunity to perform there.”

Traffic near the Main Street-Wood Street intersection was especially bad on the afternoon of July 14, and it was exacerbated by the fact that a water main on Claflin Avenue broke during the Main Street Construction Project work being done there.

However, the news wasn’t all bad, according to Water-Sewer Manager Eric Carty.

“We’re actually kind of lucky that it happened now rather than after they were done with the pipe work,” Carty said. “There was a 2-inch iron pipe that no one knew was even there.”

Carty explained that iron pipes — an old and outdated use — are located “all over town” and are “accidents waiting to happen.” He added that the town’s records are not complete in terms of identifying where the iron pipes remain.

The town was able to repair the Claflin Avenue break quickly, Carty noted.

“We went about as soon as one could go,” Cary said. “[Main Street Corridor Project contractor] Amorello helped us with it. It was backfilled and fixed in two hours, which is very fast.”

A resident recently reached out to inquire about when new shade trees will be planted on the Town Common, noting that many dying trees have been removed in recent years.

I checked with Parks & Recreation Director Jay Guelfi, who indicated that he has been working with Bartlett Tree Experts to develop a plan, with no immediate timetable.

“I understand that there are some residents that have a preference for large shade trees. We will defer to the experts on what species of tree makes most sense,” he stated. “Our plan is to work with Bartlett over the next several years to address tree maintenance.”