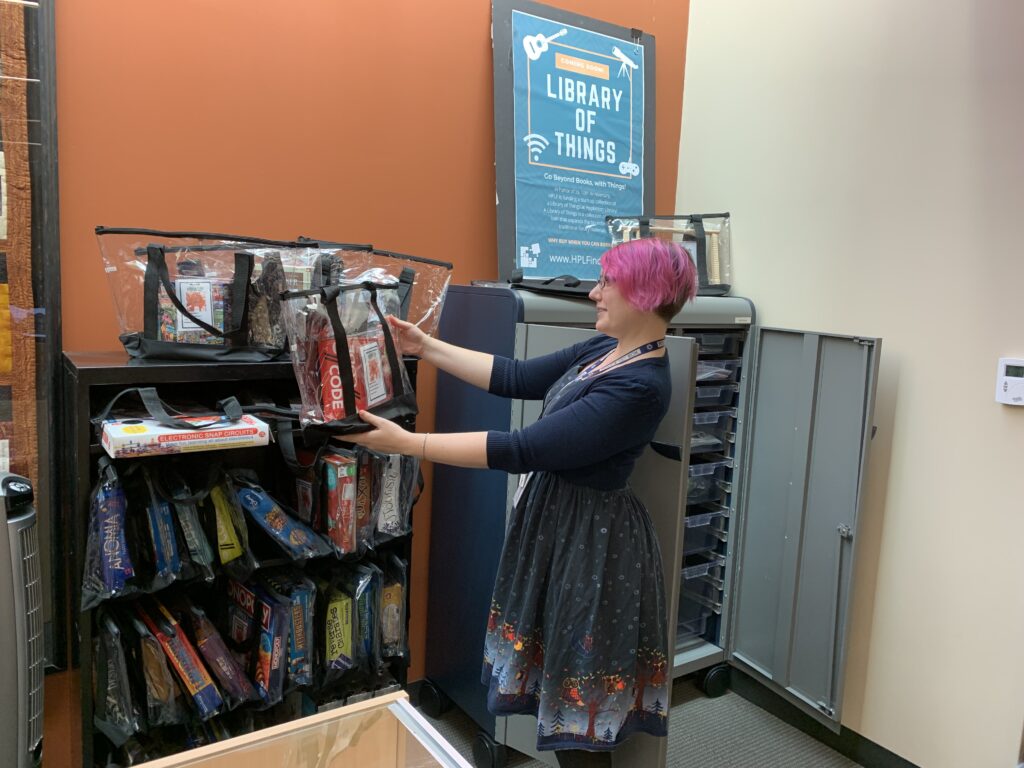 Librarian Danielle Cook checks out one of the items in the library of things. PHOTO/JERRY SPAR

Libraries are evolving, and Hopkinton Public Library is doing its part to keep up with the times.

A popular venture now is a “library of things” — a collection of items not traditionally associated with libraries.

Hopkinton debuted its library of things last month — thanks to financial support from the Hopkinton Public Library Foundation — and there will be an open house on Saturday, Oct. 22, from 10 a.m.-4 p.m. to formally introduce the program to library patrons.

“We had a soft launch in September and this is kind of our big party, if you will,” explained Danielle Cook, the adult services librarian who is charge of the library of things. “We’re at the stage where the collection is in existence and we’re starting to circulate items. So, now, folks can come to the library and actually get the things that we’ve been talking about for ages.”

The library of things is filled with a variety of items, and the list will grow.

“Currently the stuff that is ready for people to borrow and take home are a bunch of board games and puzzles, a number of crafting items — knitting needles, crochet hooks, different types of looms for weaving — and also some of technology or recreational items, like a bird watcher’s kit and a couple of home electricity monitoring kits so folks can determine good ways to cut down on electricity in the house and make their home a little greener,” Cook said. “We have a couple of musical instruments, but those we are still working on, so they are not available to the public quite yet.”

Cook sought input from a variety of sources before determining which items to purchase.

“I have a big spreadsheet that includes both ideas from some of our staff as well from some other libraries that have similar collections,” she said. “There also was a big survey that we did just before the pandemic to develop our five-year plan, and there were some questions about what you would like to see in the library of things included in that, because the idea was rattling around at the time.”

Cook has high hopes for Hopkinton’s library of things to continue to grow and become an important part of the facility.

While the library of things currently exists next to the Reference Desk, the open house will be held in the library’s Ellsworth Room, where Cook will answer questions and demonstrate how to use the items.

“I will have a bunch of things with me, and I will be using the things,” she said. “I will talk to folks about the things and do various demonstrations so folks can see them in use and see what you can do with them.

“We have had some items circulated and some reservations for items come in, but this big event on the 22nd will be the moment for us to really connect with the community and show them what we have and what’s going on with it, and also give them an opportunity to get familiar with the items and get a little more confident in their ability to use them. Because some of the items can be a little bit overwhelming when you look at them at first. If you’ve ever see a loom strung, you look at all those pieces and you’re like, ‘Oh my, what do I do with that?’ ”

The majority of the items can be taken home by patrons — excluding a 3D printer and some electronics. And suggestions for future purchases will be welcome.

“There are so many options and so many different types of things that we can have,” Cook said. “I don’t think we’ll run out of ideas anytime soon.” 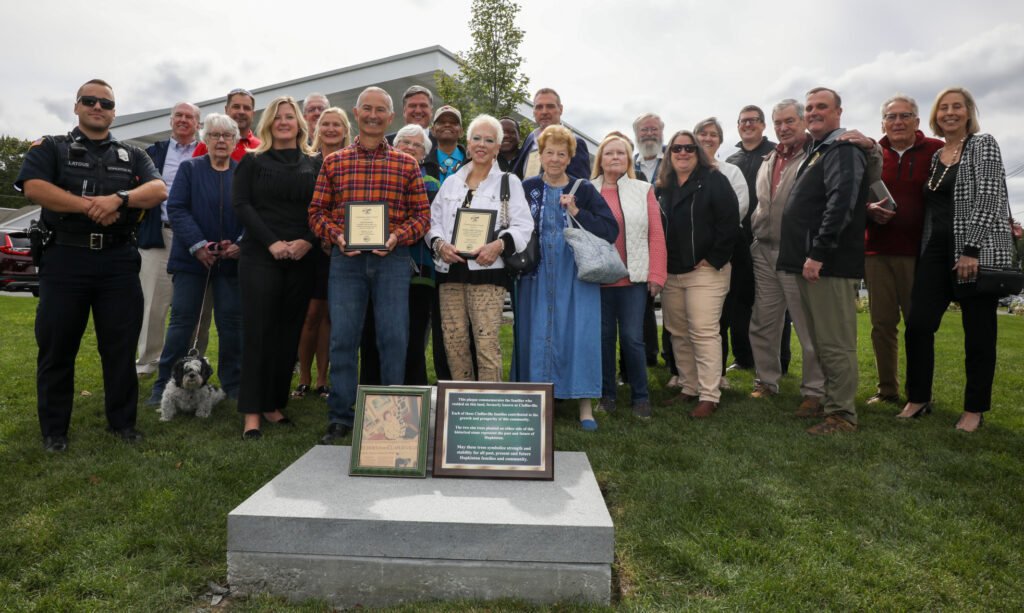 Alltown Fresh hosted a ceremony Sept. 30 recognizing the history of the land on which the market sits. PHOTO/JOHN CARDILLO

Alltown Fresh all in on history

Nice touch by Alltown Fresh to recognize the history on the site of its new market and gas station on West Main Street, at which used to be called Claflinville Four Corners. At a ceremony Sept. 30 outside the market, Alltown Fresh representative Chip Rives said that in addition to “redefining roadside dining,” the company wanted to honor those who helped build this community.

“Part of looking toward the future, you need to make sure you honor the past and look back on what was here and what we’re building upon,” Rives said. “A lot of people have put a lot into this town and into this land, and we want to honor that.”

Cliff Kistner previously owned the home that sat on the property at the corner of West Main and Lumber Street Extension. Earlier this year, the house was torn down to make room for Alltown Fresh to rebuild and expand the convenience store and gas station on the site.

Kistner recalled a story about his great-grandfather, a tree-cutter who originally came to Hopkinton to work clearing land for houses and businesses and decided to get married and settle here. Kistner said he had to move his possessions one wheelbarrow-full at a time, walking all the way from Millis.

Kistner, who has started a business building treehouse resorts in North Carolina, Tennessee and Georgia, returned for the ceremony and to pay tribute to his fellow longtime residents.

“I’m very humbled to have known all of you and have served with you and to look into the past to create a future that is much more than we could have ever imagined,” he told the assembled crowd.

Alltown Fresh has installed a stone marker and plaque commemorating the Claflin Four Corners history. Additionally, two elm trees have been planted on either side of the monument, “representing the past and the future of the town and this great site,” Rives said.