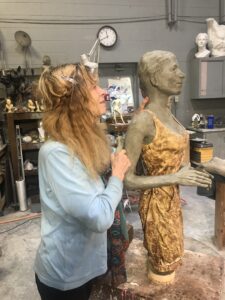 Bobbi Gibb, shown sculpting her self-portrait, still runs, some 55 years after she became the first woman to complete the Boston Marathon.

When children are young, they tend to gravitate toward joyful activities like art and running, Bobbi Gibb has observed. Now 78, Gibb says, “I just never stopped doing those things.”

“I have always loved to run,” she said. “And I kept on running, even when other people had stopped.”

Gibb is the first woman to run the entire Boston Marathon and she is recognized as a three-time winner in the Pioneer Women’s Division in 1966, 1967 and 1968. She also is a lifelong artist, and the two passions met when a sculpture, her self-portrait, was unveiled Tuesday night at the Hopkinton Center for the Arts.

The sculpture will be displayed at the HCA until the completion of the Main Street Corridor Project, at which time it will be installed at the corner of Main Street and Hayden Rowe Street.

Gibb finished the life-sized artwork more than two years ago, but the pandemic delayed it being cast in bronze after she had molded it out of clay. She had initially thought the sculpture should be of a generic woman, but said the 26.2 Foundation pressed her to make it a sculpture of herself. Gibb joked that it’s the first time she’s had a living model for one of her artworks.

“Unless the sculpture is alive, it’s not done yet,” she said. “I want my sculptures to be alive from the inside out and catch different aspects of a person’s character, whether it’s sad or thoughtful, and it’s the same with athletes. When I am working on an athlete, I feel it from the inside out. The sculpture has to have motion and have a spirit.”

Her motto is: “Capture the human spirit in bronze.”

Gibb brings an intricate knowledge of the anatomy to her art, having studied as a premed student. In those days, being accepted into medical school as a woman was as much of an uphill climb as being allowed to compete in a marathon, she said, so she eventually went to law school and still practices law today.

“I grew up in the 1950s and into the early ’60s and I could see, even when I was an adolescent, what was up ahead of me, and I didn’t like it,” she said. “Women were subjugated. Women professionals were looked at as weirdos. The gender differences and the roles were very defined, and people thought women weren’t as capable.”

The culture she grew up in left her fuming, and Gibb found her peace in running. 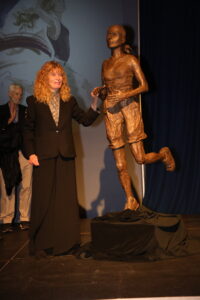 Bobbi Gibb unveiled her statue during an event at the Hopkinton Center for the Arts on Oct. 5 PHOTO/JOHN CARDILLO

“I loved to run, I felt alive and free,” she said. “Everyone thought I was nuts, but I saw the marathon in ’64 and I fell in love with it, and something told me I wanted to be a part of it. These people were my tribe.”

Gibb trained by herself for two years, eventually running up to 40 miles per day. But she still received a rejection letter just weeks before the 1966 Boston Marathon telling her that the risks were too great to allow a woman to try to tackle 26.2 miles. Gibb said she crumpled up the letter and went for a run. She also saw an opportunity.

“I realized if I could run 26 miles and run it well, it would throw into question all of the other misconceptions about women,” she said. “So I thought, ‘I have to run it.’ That’s where I was, at this juncture of loving to run and then hoping I could break through the prejudices and false beliefs.”

That year, Gibb showed up in Hopkinton in her brother’s Bermuda shorts and a bathing suit covered by a sweatshirt. She jumped in and ran the entire course, finishing ahead of hundreds of male competitors. She said she was encouraged by how friendly the men were, and six years later the women’s division of the race was officially sanctioned.

Gibb still runs. Although she says she runs shorter distances and a bit more slowly than she used to, she completed 10 miles during one recent workout. She also is hoping to have the opportunity to do more life-sized sculptures, and said Hopkinton would have first dibs since the town has treated her so well over the years.

“This sculpture was a lot of fun and there were so many of the nicest people involved with it,” Gibb said. “The people of Hopkinton, the 26.2 Foundation, everyone who worked on this was just wonderful. It was really a community project and it was a great experience.”

Even though she sculpted the clay, Gibb said she had not seen the finished product in bronze due to the pandemic.

“I just hope they got the head on straight,” she said with a laugh.