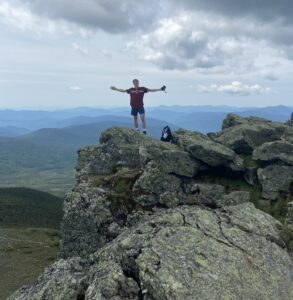 A veteran of Spartan races, Chris Mastroianni will tackle his first marathon this month.

Like most Hopkinton residents, Chris Mastroianni grew up watching the start of the Boston Marathon. He remembers having some of the elite Kenyan runners visit his school and the pomp and circumstance of being at the beginning of the world’s most famous road race.

“The start of the Marathon has been a holiday around these parts,” Mastroianni said. “I remember biking over to the start line on Patriots’ Day and I always thought it was so cool to see the elite runners. Being in that atmosphere, seeing all the people cheering, it’s always something I have wanted to be a part of.”

Mastroianni will get his chance this year when the 23-year-old lines up with the thousands of other runners. This will be his first attempt at running 26.2 miles, but he has competed a half-marathon before and is no stranger to athletic events.

Mastroianni enjoys competing in Spartan races, which involve various obstacles and physical challenges. He also competed in tennis, wrestling and soccer during his time at Hopkinton High School.

“I am probably a little bit more suited to the Spartan races, but I have always liked working out, lifting and going to the gym,” he said. “Spartan races incorporate a lot of upper body strength and other aspects of physical health, other than running.”

But the marathon is, of course, just running. Mastroianni has been building up his mileage throughout the winter. The training has led to some nagging injuries. His hamstring has been sore and his shins took a little bit of time to get used to pounding the pavement.

“I have never run this much or this frequently in my life,” he said. “My cardiovascular health feels pretty good, I am just trying to get the legs ready.”

Mastroianni is running to benefit a local charity, Project Just Because, which provides services including food and clothing for people in need.

“PJB is an absolutely amazing nonprofit that runs various programs throughout the year serving the basic needs of families, children and seniors,” he wrote on his fundraising page.

He said the programs PJB runs during the winter and through the holiday season helped inspire him to support its cause.

A 2021 graduate of Boston College, Mastroianni said that other than the start line in his hometown, he is excited to run past his alma mater and expects he will see friends and classmates out there cheering him on as he makes it through the last several miles. He isn’t sure whether this will become an annual occurrence for him, but said he would like for the 2022 Boston race not to be his first and last marathon.

On his fundraising page, Mastroianni described the chance to run Boston as a “dream come true.”

“I feel like the Boston Marathon is the pinnacle of marathoning,” he said. “This was not an opportunity that I wanted to pass up.”