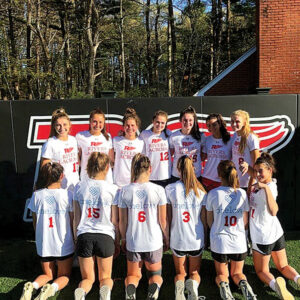 Members of the Rivers School girls lacrosse team, including Hopkinton’s Nathalie Ahn (back row, second from left), show off their One Love Foundation-themed uniforms prior to a game this spring.

Hopkinton resident Lynne Ahn and her daughter Nathalie are on a mission to talk about love.

After hearing about the One Love Foundation, an organization that educates young people about the difference between healthy and unhealthy relationships, the two became inspired to help spread their message to other young men and women.

One Love was founded by the family of Yeardley Love, a University of Virginia lacrosse player who was killed by her boyfriend in 2010.

“People knew there was something not quite right with their relationship. He was possessive and abusive, but no one had the language to describe it,” Lynne said.

The foundation’s mission is to educate about relationships, indicate how to identify red flags in a relationship and empower people to avoid abuse and learn how to “love better.”

Knowing how important this message this is, especially for teenagers, Nathalie worked with the administrators at the Rivers School in Weston, where she is a senior, to bring the One Love program to their school.

This past winter Nathalie’s hard work paid off when the school’s juniors and seniors took part in an “escalation workshop” where they watched a 45-minute video about the signs of healthy and unhealthy relationships and then broke into small groups for discussion. The small group sessions were led by close to 35 volunteers from the school who had been trained by the organization prior to the workshop.

“People said they were really impacted by it,” Nathalie said of the session. “Some of my friends said that it was really eye-opening to talk about relationships this way.”

Nathalie said that although the topic of love isn’t one that gets a lot of attention, it is just as important as any other skill students needs to learn, especially as they head off to college.

“In school we are taught math and English, but we should also be teaching kids how to be a good friend, a good boyfriend or girlfriend … how to love,” she said.

Seeing the positive impact the One Love message had on her classmates, and hoping to continue to raise awareness in the community, Nathalie coordinated a One Love dedication game that was hosted by the Rivers girls and boys lacrosse teams on May 8.

The teams sold T-shirts with the slogan “Love is better” before and during the game and held a moment of silence for Yeardley Love, to remember a life cut short due to domestic violence.

“It was a very nice tribute; a nice day,” Lynne said. “The girls made socks for the other team, too, to continue to spread the word.”

The school was able to raise close to $1,000, which will be used to pay it forward by helping to take the programming to other schools that otherwise might not be able to afford it.

“It’s important to keep talking about this topic,” Nathalie said. “The more people that know, the better.”

The Ahns hope to see the issue addressed in their hometown school as well.

“I would love to see this program brought to Hopkinton High School,” Lynne said. “It’s such an important message for students.”

For more information about the One Love Foundation, visit joinonelove.org.