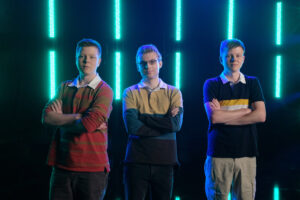 On March 23, residents can tune in to cheer on Hopkinton resident Lyle Broughton as he battles for domino domination.

Men and women ranging in age from 19-69 will compete in teams of three. In each episode, teams will be given a theme for their toppling challenge. Those who most amaze the judges will progress to the next round until the ultimate finale. At stake is a cash prize, a trophy and the grand title of Domino Masters.

“The show really challenges conventions; you have to make decisions and take risks, you have to push the envelope,” says Broughton, explaining that chain reaction art encompasses all kinds of materials, including but not limited to dominos.

“As a child, I played with Hot Wheels and marble chutes, and I had wooden blocks that I’d set up like dominoes; but I was always the kid trying to do stuff you shouldn’t do … so I was always putting cars down chutes, or trying to get marbles to roll uphill, or blending toys together to get them to work as one unit,” he recalls with a laugh.

Broughton, who attended Leominster High School and Hampshire College before moving to Hopkinton, later found an online community of people who were creating unique machines in their homes and posting videos of their experiments, and felt he could make a meaningful contribution.

“Discovering that community was the impetus for me to start building in earnest,” he says. Now a professional chain reaction artist, the 23-year-old Broughton – known online as “jackofallspades98” – has a YouTube following of 5.8K subscribers.

His partners on “Domino Masters” are 21-year-old twins Derek Koops and Alex Koops of Sioux City, Iowa. Together, the three are the “Dominerds.”

Broughton jokes, “It’s important to stress, we’re not nerds who also like dominoes — we’re just nerds about dominoes!” He says he couldn’t have asked for a better team, and describes how they build off one another’s strengths.

“Derek and Alex are the domino experts, so they do the domino part; I’m the machine guy, so I do the chain reaction part. And of course, there’s a huge emphasis on both in the show — you can’t have one without the other. So our team dynamic is that we have our specialties, but we each have an intimate understanding of the other’s art form.”

He notes that there is more to the craft than the audience might expect.

“I think one of the biggest misconceptions about what we do is that it’s more akin to engineering than to art,” he shares. “I hope that’s something the show really disproves, because it’s more about art. It’s about making it look good, and creating a sense of wonder, suspense, humor; it’s about surprise and excitement. It’s about subverting expectations.”

While engineering focuses on precision and reliability, Broughton explains, “Chain reaction is about using whatever materials are available and solving a problem that doesn’t exist in the most unreliable way possible.

“Sure, it has to ‘work’; but the hallmark of a true domino master is when the technical aspects are second nature and you can focus on the other elements. It’s about all kinds of other things besides just making it work — it’s telling a story.”

Those stories combine fun with value: businesses have started to harness chain reaction art to promote product launches or showcase different ways their products can be used. Broughton has done work for companies across the United States, including Gillette, Disney, Microsoft and “The Ellen Show,” as well as various museum events, such as Domino World 2019.

He hopes that “Domino Masters” will increase exposure to chain reaction art and expand understanding of its applications. “This is something the world can use, and I think the show does a good job of demonstrating that,” he says.

He also appreciates how the show has highlighted the camaraderie that exists in the tight-knit community, which unites people from a wide range of professions and geographic locations.

“These contestants know each other, they’ve collaborated, they’re good friends in real life,” he notes, observing that the community has grown and developed substantially. “I’ve made a ton of friends over the years, and that’s been the most rewarding part.”