The Hopkinton School Committee met Thursday and discussed the progress on the high school addition, which now is expected to be mostly complete by the beginning of the school year after corrections to the work were made.

The project began last fall, and the original plan was for it to be finished this past January. The timetable later was pushed back to late spring, which also has passed.

Hopkinton Public Schools director of finance Susan Rothermich said that there had been problems during the project in procuring construction supplies because of the pandemic. Materials to complete the addition now are on site, she said.

“Another issue that did come up was existing conditions — namely the roof,” she said. “The existing roof did not agree with the as-builts. So in other words, tying into that existing hip did not agree, so there was redesigning, re-engineering to make that match. Each time you do these things, it causes more delays.”

When changes are made to the plan, representatives from project management company P3 and architect DRA review the project. They have met on a weekly basis since August.

P3 construction manager Daniel A. Pallotta said that Rothermich “was kind when she said this didn’t match and that didn’t match.” 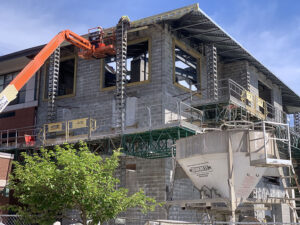 “We actually peeled the roof off and found some deficiencies we had to correct,” he explained. “We expect to have the sub-roof, which is a metal decking, completed by Monday.”

The insulation and the main roof will then be added. When that is completed within an expected two weeks, it will be “a run for the races” to get the interior of the addition finished before the start of the school year.

The brick for the façade, which has been chosen to match the existing shade, is expected to arrive by the middle of next week and is the final delivery needed for the project.

Pallotta said the project may take an additional couple of weeks, but that he would not accept substandard service. When completed, it will be a “50-year building.” Finishing touches may be needed in September, but he told the committee that the building would be “occupy-able and safe.”

“Make no mistake, we’ve got a long summer ahead of us,” Pallotta said.

Member Joe Markey asked if enough pressure was being applied on the contractor and subcontractors to prioritize completing the project.

Rothermich said there has been communication to the contractor and subcontractors about the project’s urgency. “There’s a lot of heat on the [general contractor],” she said. She added that she is working with high school principal Evan Bishop on a contingency plan in case the project is not completed by Sept. 1.

The committee approved plans for four international trips during school vacation periods next year by a 4-1 vote. Member Meg Tyler voted against the trips, noting the high cost and the concern that they are out of reach for some students to afford.

HHS assistant principal Laura Theis described the travel opportunities. A STEM-focused trip will be offered to Germany and Switzerland, with a tour of the Black Forest focusing on sustainability. An interdisciplinary trip to Thailand is being planned for February vacation, while a European excursion to England, France and Germany focusing on the history of World War II is proposed for April vacation. A trip to Peru also is slated for April, with an immersion into the Spanish language and Peruvian culture being the highlights.

She asked if travel companies are compared for prices. EF Educational Tours offers the trips and is the company that has been used for years, Theis said.

“I just don’t like the fact that you have to have $4,500 to do a 10-day trip,” Tyler said. “And I think that only allows the most privileged students to go, even for those families who can pay monthly. I find it very distressing.”

Theis said that students can prepare early in their high school enrollment to save for a senior year trip. Vice chair Amanda Fargiano added that students and parents often hold fundraisers to defray the cost.

Lya Batlle-Rafferty agreed with Tyler about the financial access to trips for all students. She asked if scholarships or community resources could be sought in the future. …

Theis also noted HHS will be welcoming 16 European students next year — eight from Italy, six from Spain, one from France and one from Albania. “We are very popular in Italy,” she noted, saying students who have come speak highly of their experience, which encourages others to apply.

Superintendent Carol Cavanaugh said that there have been 32 new students registered in the last seven days. Twenty-four of those are returning from home schooling.

There are 232 approved enrollments for kindergarten, with 32 pending. For first grade, there are 19 approved new enrollments and seven pending, which is the largest increase for a grade.

This means the district now has 132 additional (net gain) students for the coming school year. …

In COVID-19 news, the superintendent said there have been no positive cases since May 5. During 183 days of class, only 6 percent of the 4,500 members of the school community, or 264 people, tested positive.

For the upcoming school year, there will be no requirement from the Department of Elementary and Secondary Education (DESE) to wear masks and practice social distancing. However, DESE will be working with community health departments to see if students in Grades K-5 should continue to wear masks. For summer programming, DESE is encouraging — but not requiring — mask use for elementary school-aged students.

Markey questioned whether masks were necessary for that age, given the fact that there has been no spread of the virus recently.

The superintendent said that age group is not yet eligible for the vaccine, which may have driven the policy.

“We don’t want to be in the business of asking families to present whether or not their children have been vaccinated,” Cavanaugh said, noting the same held true about questioning teachers.