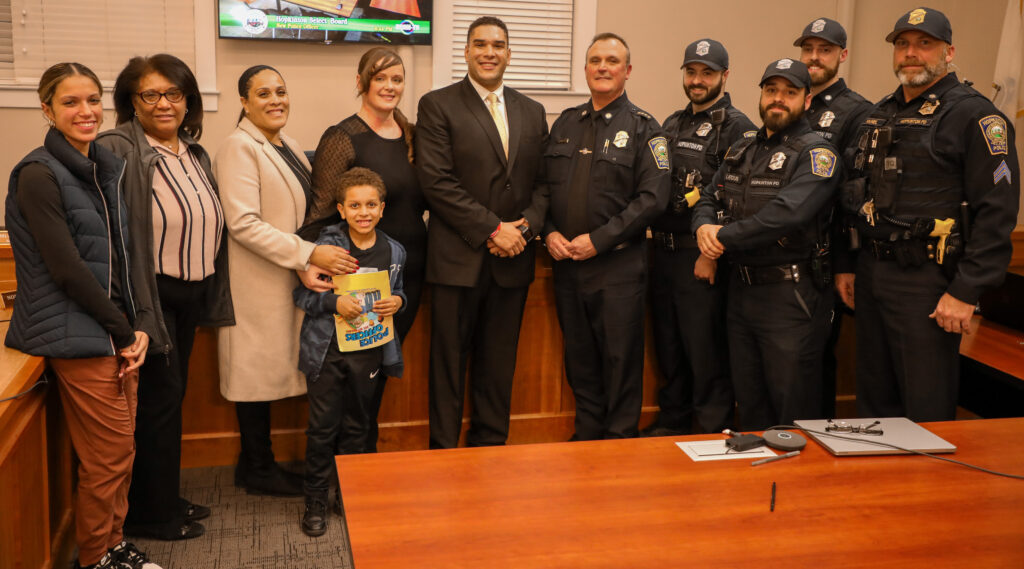 Augusto Diaz Jr. (center) poses with his family and members of the Hopkinton Police Department after being introduced as a new officer. PHOTO/JOHN CARDILLO

With local emergency personnel speaking out against the proposal for a regional emergency communications center (RECC), plans were made for an information session before the Select Board makes a decision on whether or not to proceed.

As part of the proposal, Hopkinton would join with Southborough, Westborough and Grafton to share emergency call center staff. The other three towns continue to discuss the issue as well.

During the public comment portion of Tuesday’s meeting, a letter was read from Gregg DeBoer, who is president of the Hopkinton police union, Local 254. DeBoer questioned whether it would make sense to have a dispatcher in another town — who likely would not be as familiar with Hopkinton — attempting to direct local emergency personnel, and whether there could be delays answering calls because of the wider area of coverage.

“The partnership between Hopkinton Police officers and the communications center has created a safe environment for its officers and the Town of Hopkinton as a whole,” DeBoer’s letter reads. “Our dispatchers’ dedication to Hopkinton’s police officers and firefighters is second to none. Maintaining a dedicated communications department in Hopkinton will continue to allow our team to continue to provide you with the best level of service possible. Would there be cost savings [with an RECC]? Possibly. But my question is, at what cost?”

Town Manager Norman Khumalo said he appreciated the comments from the public.

“We are taking them seriously, respectfully,” he said.

Khumalo noted that an inter-municipal agreement (IMA) can be signed by the Select Board without Town Meeting approval. However, he noted that if an agreement was reached, “depending on the governance structure that is established, a Town Meeting vote may be required.”

Select Board members raised questions about the proposal and the logistics, with plans to address the concerns in more detailed fashion at the information session, which will be scheduled for January.

Khumalo said he was going to set up a webpage and dedicated email address for the topic.

Former Hopkinton Police Officer Pat O’Brien encouraged the board to take its time and not succumb to pressure from the other towns to make a rushed decision.

“It’s going to affect this town for many, many years to come,” he said.

Police chief gets support for changes in rank structure

Police Chief Joseph Bennett appeared before the Select Board and requested additional higher-ranking positions within the department — not new hires, but changes to the rank structure.

The board voiced support for Bennett’s proposal, which did not require a vote at this time.

One of the new promotions would be an individual assigned to special projects. Another would be one of the school resource officers. “We need someone of rank daily there [in the schools],” he said.

Bennett noted the challenges many departments are having with hiring and retaining personnel and said this would help in that regard.

“We need to build an organization where the police officers see that there’s opportunity, and it’s not just linear,” Bennett said. “That goes to building a team. … It’s built from the bottom up, it offers opportunities for advancement, it safeguards the high-risk jobs and it gets things done.”

While there would be an increase in costs, Bennett said it would not require additional budget requests.

Bennett has been working without a deputy chief since John Porter was placed on administrative leave in August pending an investigation. Bennett indicated the situation remains “unresolved,” and while these rank structures would not take immediate effect, in the long run it would allow more individuals to share administrative and supervisory responsibilities that he currently handles.

“This plan builds in additional resiliency,” he said.

Touching on some of the department’s challenges, Bennett noted that call volume is up 50 percent compared to the first half of the year. He said that there were 817 calls in June, and in November it rose to 1,220.

“That’s a significant jump, and we anticipate continuing to see that,” he said. “As well as what we’re facing is the complexity of the calls is increasing — more mental health calls, more crisis calls that require more time and the right people trained the right way. The complexity has increased a great deal.”

“We are confident that it’s going to exonerate more than cause any problems,” he said. “These officers we have are tremendous and they’re out there doing good work every day. And when someone says that they did something, we’re going to be able to document exactly what happened. But that’s a huge undertaking. That’s a lot of man hours to manage once we get it in.”

Bennett said he put in a great deal of time doing research, taking with departments from all over the country and discussing issues with other chiefs at a recent conference. Ultimately, he came to the conclusion that the rank structure should be adjusted. 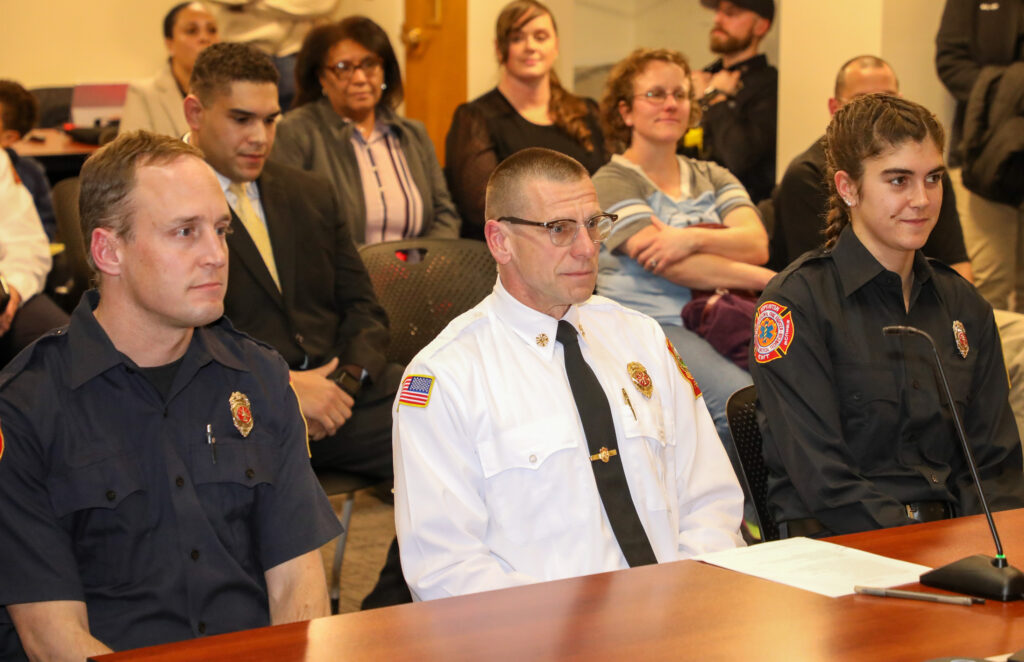 One new police officer and two firefighters were introduced to the Select Board and community.

Augusto Diaz Jr. is the town’s newest police officer. He said he was informed that he would be the town’s first Latino officer.

Diaz has worked as a project manager for the Latino Education Institute at Worcester State University since 2013, and he served as a police officer/security safety aide at UMass Medical School for two years, until March of this year. He was trained at the Boylston Police Academy in 2021.

“I think that I can bring my experience and my knowledge not only of being a person of color but working with other people of color as well to the Town of Hopkinton,” he said.

Bennett said Diaz was encouraged to apply by friends he has working here.

“He was sought out by department members,” Bennett said. “They’re building their team, they’re finding their peers. And they really did a good job in Augusto.”

At the Fire Department, Matt Berge, who has experience serving in the Navy, comes to Hopkinton after working as a firefighter/paramedic in Hopedale. Fellow new hire Tyla Doolin had been working for the Holliston Fire Department. …

The board paid tribute to Fran Clark, who last month retired after 39 years working for the Fire Department. “He served the community well,” Fire Chief Bill Miller said. Added Khumalo: “Personally I will miss his leadership, his camaraderie and the passion that he brought to the specialties [such as the dive team].” …

Robert Klocek and Josh Jones were appointed to fill vacant positions on the Youth Commission. …

Christine Lambert was appointed to fill an open seat on the Personnel Committee.

Regarding the town’s fiscal year 2024 budget, Khumalo said listening sessions and planning continue — although no residents showed up to the most recent listening session at the Senior Center.

“I’m working with the finance team to deliver a balanced budget for presentation to the Select Board in January,” Khumalo said. “We’re still working to close the budget gaps, which is about $1 million, as we develop the operating budget. I’m also looking closely at potential sources of funds and budget requests to develop options for addressing that shortfall.”

Khumalo noted that the five-year capital plan shows a list of potential needs totaling nearly $300 million — and none of those projects have been put forward for a vote at Town Meeting — so his staff is keeping that in mind as it works on the upcoming year’s budget.

“In considering the FY 2024 budget it is essential that we keep in mind this colossal, bold wave of potential funding entering our planning horizon,” he said.

Regarding the Massachusetts Water Resource Authority connection project, Khumalo said town officials will be meeting with counterparts from Southborough to discuss a letter of intent. “What we’ve heard from Southborough is that they’ve already worked out a framework in terms of what they would be looking for, and they want to convey that to us,” he said. …

Regarding PFAS in the town water, Khumalo told the board: “Our numbers are not getting any better.”