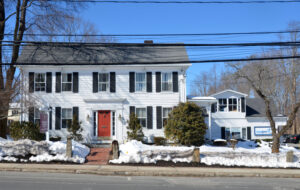 The Aaron and Lucy Claflin house at 76 Main St. faces an uncertain future, as the property owner has sought a demolition permit. PHOTO/MICHELLE MURDOCK

According to the Hopkinton Historic District Commission’s website page, historic districts in Massachusetts have three major purposes, as stated in Ch. 40C of Massachusetts General Law:

To preserve and protect the distinctive characteristics of buildings and places significant to the history of the Commonwealth and its cities and towns;

To maintain and improve the settings of those buildings and places;

To encourage new designs compatible with existing buildings in the district.

A preliminary study report of the house at 76 Main St. was prepared by a historic preservation consultant and submitted to the Massachusetts Historical Commission and the Hopkinton Planning Board on March 1.

In that report, Historic Preservation Consultant Jennifer Doherty wrote: “The house is one of the few remaining early buildings at Hopkinton Center, and retains a high degree of integrity. The house is part of a cluster of historic buildings that has previously been recommended for local historic district designation.”

The report also states that it is important to note that the research on the building was completed without any interior investigation and that past documentation work identified the date of construction as late 18th century.

“However, its present exterior appearance dates it to the early 19th century,” wrote Doherty. “This is not to say that there is not an earlier portion of a building within the current house, or that an 18th-century house was updated so heavily in the early 19th century that all earlier periods of finish have been removed. With no access to the interior, though, it is difficult to provide a more precise date than the late 18th century or early 19th century.”

The effort to provide a greater level of protection for the property was triggered when the owner of the property, Paul Mastroianni, sought a demolition permit last December. According to the town’s online property assessment database, 76 Main St. was purchased by Mastroianni on May 31, 2018, for $783,000.

According to a press release from the Historic District Commission, public feedback is integral to the process and is being sought at two public hearings. A public hearing on the preliminary study report is scheduled for March 20 at 7 p.m. at Town Hall and a second public hearing to gather feedback on a final study report will follow on May 1 at 7 p.m.

A two-thirds majority vote at the annual Town Meeting in May is required to create the district.

Feedback may be given in person at either meeting, via email to hdcchair@hopkintonma.gov, or via mail to Historic District Commission, 18 Main St., Hopkinton, MA 01748.

To view the preliminary study report online, visit the town website at hopkintonma.gov.

At a meeting on March 12, the Hopkinton Chamber of Commerce voted not to support the creation of the single-property historic district. According to Nick Slottje, a Hopkinton resident, business owner, member of the chamber’s board of directors and chairman of the chamber’s economic development council, the motion passed overwhelmingly, as well as a motion to oppose the extension of the demolition holding period.

“It is my feeling that this sets a very dangerous precedent in Hopkinton, one that borders on infringing on owners’ property rights,” Slottje said. “How do we ensure that these single-structure designations are being viewed objectively?”

He went on to say that the economic development council has been very concerned about the significant tax imbalance with respect to residential vs. commercial revenue and has been “fighting tooth and nail to bring more businesses to town.

“At a time when it is so critical to create commercial and business tax revenue, that has no further impact to our overcrowded schools, this simply adds more red tape and creates an even larger sense that Hopkinton is not business-friendly,” Slottje said.

Property owner Paul Mastroianni could not be reached for comment.