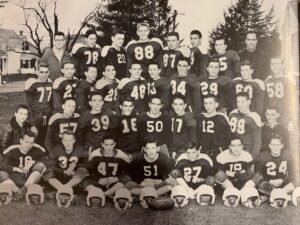 The 1955 HHS football team compiled a record of 9-0, capped by a 32-20 Thanksgiving Day victory over rival Ashland. The author is in the front row, last player on the right.

First let me start with a little bit about the author. I was ready to become a football star at the age of 14, very small (5-foot-5, 125 pounds) and very slow (Coach Mario Mariello would often yell at me while we were doing laps at the end of practice, “Hamilton, I don’t mind you carrying a piano around with you, but you don’t have to stop and play it!”). I was a member in good standing of Coach Mariello’s “Hamburg Squad,” which meant we spent practice opposite the first team being pounded into hamburger every day.

Now, here are the vital team facts: In 1954, the Hopkinton High School football team had gone 2-6 under Coach Dempsey in his last year as coach.

We were attending school at the old “Stedgie Prep” High School on Main Street for the first semester until we went into the new high school on Hayden Rowe, which was mostly finished in the fall of 1955, except for the septic system, which was to be located under the football field (the only field at the time), and that led us to another obstacle. All our games were scheduled as away games. Another obstacle: Workers really began digging the field in earnest in the middle of September, so there was no field long enough to practice punt and kickoff returns for the rest of the season.

However, we had a training feature no one else had. Workers had stripped a huge amount of loam off the area where they built the school and piled it up about 25 feet tall. The pile had steep and less-steep sides. Coach would have us run up the less-steep side and barrel roll down the other side to “tough us up.” After about two times over the pile, it was about like playing a whole game — very bruising.

Those were our adverse conditions. Now, let’s start the season. On a hot night in the middle of August, we assembled in a room at Stedgie Prep to meet our coaches. Mario Mariello and Paul Sullivan walked in and looked at us, and Coach Mariello said, “This looks fine for the junior varsity, but where are the varsity players?” Shortly afterward, we started the dreaded two-a-day practices. Our game odyssey began on a Saturday, Sept. 24, a warm, sunny afternoon, with a trip to Medfield and a 25-7 victory.

The following Saturday, we went on the bus to Cohasset, the only game of the season to which we traveled in street clothes. We came away with a 32-0 win, and we got to go to a nice seafood restaurant on the way home.

Then came Northborough and a hard-fought 6-0 victory — the hardest game of the season. That was followed by an easy 39-0 victory at Leicester. We won 12-6 at Westborough the last weekend of October. We ventured to Burlington on a frosty November day and came away with a 7-0 victory.

We loaded the bus for Millis in a light snow. At halftime we were trailing 6-0, the only time all year we were behind, and it was still snowing as went into the locker room expecting a blasting from Coach Mariello. He came into the locker room, shrugged his shoulders and said, “Well?” And that was all. We went on to win, 20-6. It snowed the whole game, and by the end there were 3-4 inches of snow on the field.

The Ashland police chief had warned us that no kids were to celebrate in Ashland. Around 8 o’clock that night, we formed at the Hopkinton Common, led by our only police cruiser and Fire Engine 4, and paraded around Ashland for a while with a log line of cars behind us.

My illustrious playing career ended after my sophomore season. I didn’t gain much weight or speed. After our undefeated season, many more of the guys went out for football, thus I didn’t play in any games or get a letter. I thought my time would be better spent elsewhere, so I went to work in the cemetery.