Tales from a Townie: A bike ride around town, circa 1950 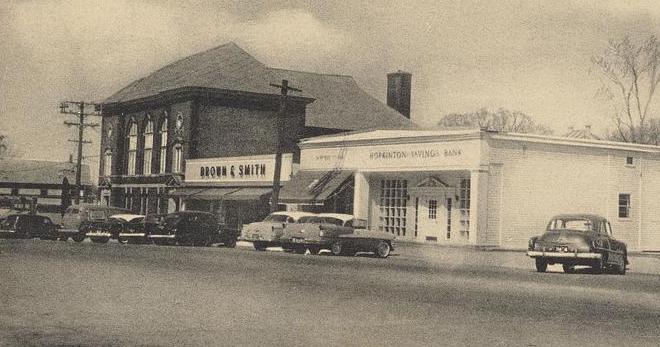 The photograph from a postcard shows Main Street circa 1955. PHOTO/HOPKINTON HISTORICAL SOCIETY

I give my book and 4 cents late charge to Ms. Marshall, the librarian.

I then ride down Main Street to Grove Street, having to wait for a J.C. Parmenter truck to go into its yard (where the CVS parking lot is now),. Then it’s on past Thayer’s Express Co. at 15 Grove Street.

I almost forgot, I have to get my mother a loaf of bread, so I head left on Maple Street to McDonough’s neighborhood store at the corner of Hayden Rowe and Maple Street. I pay 21 cents for the bread and get to buy 4 cents worth of penny candy before taking the bread home.

I ride back out to Hayden Rowe and head in the direction of Milford.

At the corner of Hayden Rowe and Grove Street is Kenney’s Mobil Service Station on the right, and further right is the A.A. Clubhouse and the baseball and football fields (where the junior/senior high school would be built in 1954.

On the left, at 85 Hayden Rowe, is Irvine’s Jenny Gas Station and Hudson Car Dealership (J.C. Parmenter is there now).

Two buildings later, at 89 Hayden Rowe, is the Honey Hill Chicken Farm, and at 95 is McIntire’s Car Repair Shop. Across the street at 98 is Terry’s Dairy Farm (where the Hopkinton Center for the Arts now resides).

Continuing my bike ride south, at 161 Hayden Rowe I pass Riddle’s Greenhouse (now Sunnyside Gardens). Across the street, at 158, is Colella’s Farm. Next, at 168, is the Grange Hall (now the Historical Society building).

At 188 Hayden Rowe is an electric appliance store on one side of the building and a small convenience store on the other. I prop my bicycle against the store wall and go inside to buy a bottle of Coke and a 5 cent bag of potato chips, which I put in my bike basket for later.

Next on my ride is Hughes Farm at 192, then Brown’s Farm (barns on both properties would be destroyed by fires later in the 1950s).

I take a left onto College Rock Road and go to College Rock to enjoy my chips and Coke. Then it’s back on the bike for the 3 mile ride home — most of it uphill.