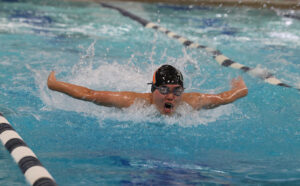 The Hopkinton High School boys swimming and diving team headed into the final relay against Ashland with a chance to win the season-opening meet. The Hillers have a small roster relative to some of their opponents and also have been hit hard by COVID-19, with athletes being forced out of the lineup.

The challenges made it even sweeter when Hopkinton took the final relay and beat the Clockers by two points.

“That set the season off on a high note right there,” coach Kristen Wells said. “It was a very exciting meet, and we have been trying to build off that energy for the rest of the season.”

It has been an uphill climb at times, with the pandemic still affecting high school sports and the team battling to overcome having top swimmers unavailable.

“We have been hit hard with a lot of our key people out for periods of time,” Wells said. “It’s been hard to fill the gaps.”

The key to overcoming the lack of numbers has been versatility. Wells said she has been able to ask different swimmers to take on different events or strokes and they have answered the call, including sophomore standout Davis Peishoff.

“He is very versatile, he has swam almost all of the events so far and he has the best time on our team in the majority of the events,” Wells said. “So we can really put him in any event and he is always a key member of our relays.”

Peishoff swam the anchor leg of the relay against Ashland that the Hillers needed to win that meet.

“He is good under pressure,” his coach said. “He stepped up and got the job done when he needed to.”

Freshman Kevin Zhu is another impressive and young swimmer whose times, Wells said, have been falling throughout the season.

“He is a great practice swimmer,” she said. “He does whatever is asked of him and he is really showing a lot of improvement in just a few weeks since the beginning of the season.”

Hopkinton has been led by a trio of captains this year: Ryan D’Alleva, Kevin Gu and Tyler Fallon.

“They have all been good about stepping up to the plate whenever we have needed them and leading the team,” Wells said.

Even with a small roster, the Hillers are hoping to have as many athletes as possible swimming in postseason meets this year. Wells said the focus is on postseason qualifying, especially for the relay teams.

“Some of our relays are really close to getting to a qualifying time,” she said. “The relays are going to be a big focus for us going forward.”