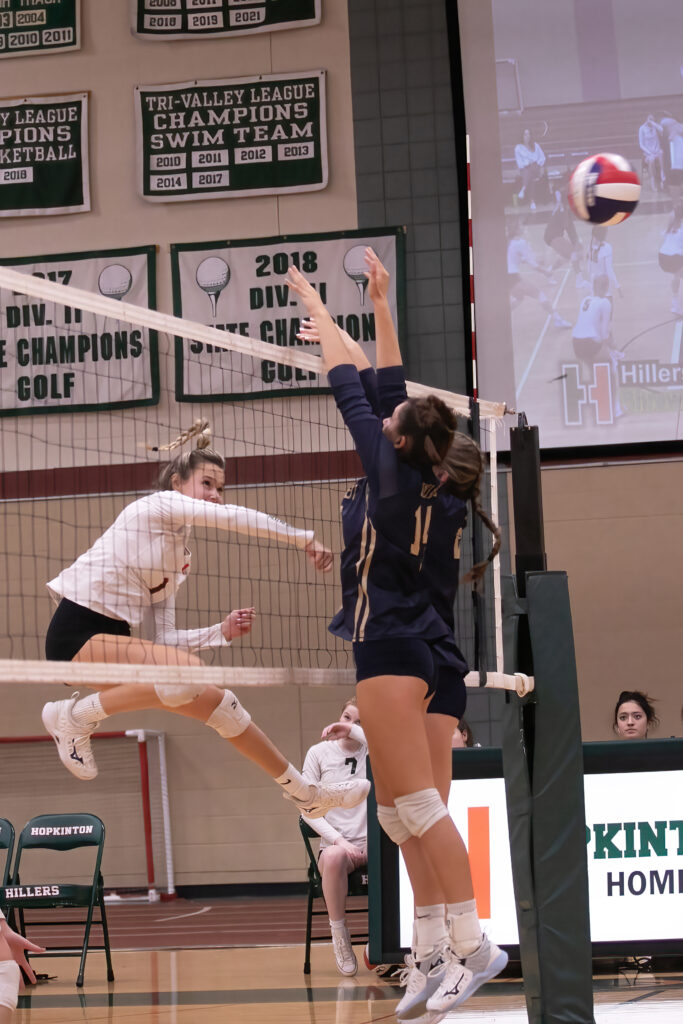 Emily Graeber (left) fires the ball over the net during a recent match. PHOTO/CHRISTINE STRICKLAND PHOTOGRAPHY

The Hopkinton High School girls volleyball team and its new coach came into the 2022 season with the burden of following up a championship campaign and a legendary longtime steward of the program.

Despite the unenviable circumstances, this year’s team has been able to overcome relative inexperience and put itself on track for the postseason and a true title defense.

With eight seniors gone from a team that captured the Division 2 state championship, players who are either new to the varsity level or who did not have as much of a chance to shine last year have taken the spotlight.

“They have made this team their own and put their own mark on it,” Sweetapple said. “It has been great to see.”

The expectations have not been any lower this fall, with Sweetapple saying she expects the team to not only get to the tournament but to make some noise once the Hillers are there.

“I always tell them, ‘We are competitors,’ ” she said. “We should not leave anything on the table.”

Defense has been a strength for the Hillers this fall, particularly the back row anchored by junior libero Abby Hebert, junior Siena Verna and sophomore Olivia Carrazza.

Up front, senior captains Annabelle Senseney and Emily Graeber are holding down the outside hitting positions. Sophomore Elsa Woodbury also has been a strong addition to the varsity floor.

“She has been doing a great job,” Sweetapple said. “Especially for someone coming in as a sophomore.”

With five sophomores on the team in total, additional pressure has been put on the captains, Senseney, Graeber and Abbie Hardenbrook, to lead the way. All three seniors stepped up to the challenge, their coach said.

“They definitely had to take on a big leadership role with it being such a young team, and they have done a great job,” Sweetapple said. “They have done well in some of our toughest matches to keep the team positive and playing hard.”

Sweetapple said she expected the start of the year to be rocky at times with such a young team.

“We were doing a little bit of rebuilding this year, but the last couple of weeks the girls have shown their persistence and perseverance,” she said, noting that the Hillers have pushed top foes to five sets and won more than they have lost in both the Tri-Valley League and the overall schedule.

The rookie head coach and Hopkinton High graduate has also had to navigate those challenges after spending the past seven years leading the junior varsity program under Margie Grabmeier, who retired in fine fashion after last year’s 25-0 record and state title.

“It’s definitely been a challenge for me, stepping into the shoes Margie filled for 20 years,” Sweetapple said. “She is someone I have looked up to. But I’ve worked with her for the past seven years and I played for her when I went to Hopkinton, so it definitely helped seeing her manage this program. She helped set me up for this position.”