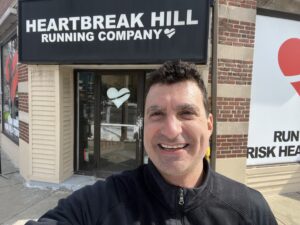 After a visit to the doctor last year provided a “wakeup call,” Evan Levine committed to getting in better shape and eventually decided to tackle the Boston Marathon.

Evan Levine has always considered himself a “3-5 mile” type of runner. But a visit to the doctor sparked a desire to take on the challenge of running a marathon, and the Hopkinton resident will make his 26.2 mile debut April 18 at the Boston Marathon.

“I turned 44 in September, and about a year ago I had a doctor’s appointment,” he recalled. “I have good sense from my mother’s side and I’ve always been thin, but I have never been a great eater. In March of last year, my cholesterol was high, my blood sugar was high. I didn’t need medication, but it was close.”

He added, “That was a big wakeup call for me.”

Levine started eating better, and his 3-5 miles became 6-7. He watched the rescheduled Boston Marathon last October and decided he wanted to try running the race for himself.

Levine began training in December and said it has been going well. He’s slowly ramped up his mileage and has enjoyed building up to the marathon distance.

“I feel accomplished after every training run,” he said.

He has also taken on this challenge with the backing, and for the benefit, of his family. Levine is running for the Hopkinton Girls Youth Lacrosse Association. His fourth-grade daughter, Julia, plays the sport and Levine, who also played lacrosse growing up, has been coaching her since she was in the first grade.

He said Julia and his first-grade son, Drew, think it’s “really cool” that their dad is going to run the Boston Marathon. His wife, Emily, also has been supportive of his endeavor and the significant time commitment needed to train for a full marathon.

Levine said he is looking forward to having the full Boston Marathon experience.

Levine said he is not sure whether this will be his final marathon, but he said he doesn’t want it to be.

“I want to continue to challenge myself, I don’t want this to be the end,” he said. “Whether it’s another marathon or a different athletic event or just chilling myself at work or in personal relationships, maybe this will give me the confidence.”

He said he will be thinking about the journey as he makes the final turn onto Boylston Street.

“Just to look back on the year’s journey I have been on since that doctor’s appointment and to think that ‘I did it,’ ” Levine said. “It’s going to be exciting.”