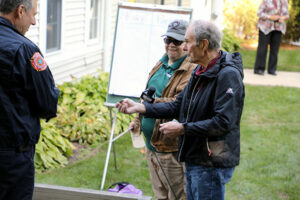 Hank Allessio, shown at the Senior Center bocce tournament in September, has made it his mission to preserve memories of his fellow veterans.
FILE PHOTO/JOHN CARDILLO

Editor’s note: This is a feature in the Independent called “Hopkinton High-Five” where we salute a resident who has made contributions to the community.

Henry “Hank” Allessio never hesitated to shift from serving our country to serving his fellow veterans.

A passing glance at the pictures of young soldiers from Hopkinton in his friend Rosemary Lynch’s old newspaper clipping during a veterans appreciation dinner at the Woodville Rod & Gun Club gave him an idea of how he could best serve them.

“Some years ago, maybe around 10 years ago now, I tripped over the veterans photo gallery,” said Allessio, now 79. “The thought occurred to me, since we were at a veterans appreciation dinner, why couldn’t we do something like that for the veterans? Get some photographs of [Hopkinton] veterans or a G.I. in uniform when he or she was 22 years old [in the service].”

From that moment on, Allessio made it his personal mission to obtain and preserve as many photographs of Hopkinton veterans as he could.

Through the help of HCAM-TV, which hosts the extensive photo gallery on its website (hcam.tv/series/veterans/slideshow.shtml), Allessio’s collection now is available to the public and has swelled into the hundreds.

“With a few minor hiccups, it got off the ground, and as you and I speak, we have over 600 photographs in our town’s veterans photo gallery,” Allessio said. “I think Hopkinton appreciates its veterans more than the typical area in blue Massachusetts.”

Allessio, who has lived in town since the 1980s, quickly came to realize as he first sorted through the pictures that, in a tight-knit town like Hopkinton, there were plenty of familiar faces.

“The locals, the townies really appreciate it because as they do their scrolling, they see so-and-so and such-and-such, and everyone they see is somebody they went to school with or are related [to],” he said. “Of course, [when you’re in town long enough you] realize everyone’s related to everyone else.”

And then Allessio had another idea.

“Gee, we’ve got all these veterans in town, and God bless us some of them are still alive, so why don’t we grab a hold of some of these living veterans and document their military stories for posterity?” he said.

Allessio’s focus then shifted from collecting still images to moving ones as he partnered with HCAM to capture video interviews of about 30 Hopkinton veterans, allowing them to share their own military stories.

Another popular setting for Hopkinton’s veterans to swap tales from their days in the service is the monthly Veterans Breakfast at the Senior Center, which Allessio also has a hand in.

Sometimes, though, those stories can more closely resemble fish tales.

“We get together on the first Friday of the month, have chipped beef, sit around lying to one another,” Allessio joked.

Their discussions often center on military history on that particular date. For their upcoming meeting on Dec. 6, the focus will be on the 78th anniversary of the attack on Pearl Harbor on Dec. 7, 1941.

“The fellows look forward to it,” Allessio said. “I feel funny because I’m sitting here on any given day, and I’ll get an email out of the blue from one of the vets explaining to me how he can’t make the breakfast and he’s going to be in Toledo visiting his mother-in-law, or something like that, and they treat me almost as though I’m the school superintendent.”

With advanced age also comes the reality that medical issues can keep some of the veterans from attending the breakfast each month. Allessio said he always makes it a point not to forget about them, and to keep them there in spirit.

“We talk about who among the veterans are probably not feeling so well. We call that ‘sick call,’ ” he said. “We encourage the more able-bodied veterans to call on the sick call folks and visit them, send a card, a note, a letter.”

Allessio’s own military story is worthy of regaling, too.

He spent nearly a decade in the U.S. Army, including four years in the Reserve Officers’ Training Corps (ROTC) in college, two years of active duty, and ensuing years in inactive reserves.

Allessio attended basic training at Fort Gordon, Georgia. Following that, he was assigned to temporary duty in Da Nang in the northern part of South Vietnam. For the greater part of a year after that, he was stationed in Okinawa, Japan.

For Allessio, though, preserving the memory of his own service is not what is most important.

“The military makes so many sacrifices and [in] a place like where we live, in large part, it goes unappreciated,” he said. “I saw the narrow part of the wedge when I saw Rosemary’s tattered newspaper to do something to enrich, at least locally, memories or appreciation of the veterans. I feel that in large part we’ve accomplished that.”

If you know of a volunteer in town worthy of recognition in a High-Five feature, email editor@HopkintonIndependent.com.