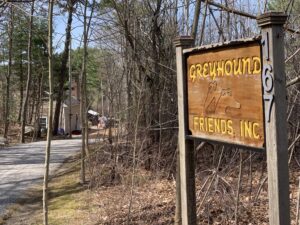 The pandemic has presented a new set of challenges for local animal shelters such as Greyhound Friends, which has been trying to help former racing greyhounds find new homes. PHOTO/JERRY SPAR

Animals in need of homes can still find shelter through the storm.

As the nation slows down during this pandemic, Hopkinton-based animal rescuers remain busy connecting pets with new families while adapting to the new realities of the crisis.

Closing of greyhound racing tracks in Florida during the crisis has led to an influx of dogs available for adoption through Greyhound Friends in Hopkinton.

In the area of Jacksonville, Florida, about 1,500 dogs have been freed up for adoption at organizations throughout the country, said Theresa Shepard, kennels and operations manager of Greyhound Friends.

Some of these dogs have made their way to Hopkinton, where they will be adopted out.

“We’re happy to be doing our part,” she said. “We’re very happy we’re able to be part of the solution.”

The number of potential adopters exceeds the number of available dogs, leading to a waiting list, Shepard said.

The biggest challenge for staff members is scheduling the dogs for veterinary visits for the needed health and wellness checks and spay/neuter procedures, Shepard said. “Vets are swamped,” she said, but the greyhounds are getting appointments.

In mid-April two cats in separate areas of New York state became the first pets to test positive for COVID-19 in the country. However, the Centers for Disease Control and Prevention (CDC) has stated that while public health officials are still learning about the disease, “There is no evidence that pets play a role in spreading the virus in the United States. Therefore, there is no justification in taking measures against companion animals that may compromise their welfare.”

Shepard noted that the dogs are checked by four veterinarians between their departure from Florida and their adoptions out of Hopkinton. They are seen by veterinarians in their home state of Florida, in Connecticut, where the dogs initially arrive, then again in Massachusetts, where they are quarantined for 48 hours as per state law.

The last exam is done by a local veterinarian, where the dogs are brought for a final check and to receive any necessary procedures such as spay/neutering.

Shepard said she is not aware of any cases of COVID-19 in greyhounds. The dogs are not specifically tested for the virus, but all state regulations are followed, she said.

The Saddle Hill Road shelter is closed to visitors. Adoptions are by appointment only and are being done outside the doors of the facility.

Many shelters across the country are seeing a demand from people seeking to foster animals during their time of confinement. Animals that are fostered during this crisis are taken in temporarily to be cared for and socialized with individuals who usually return the animals to the shelter for permanent adoption once they are allowed to resume their usual activities.

Greyhound Friends is not accepting fostering applications because of the huge demand for adoptions. As soon as dogs come in, “They’re going out as soon as we can get ready to go,” she said.

The organization maintains a waiting list of potential adopters, who can submit an application via the organization’s website at greyhound.org.

Fostering has been popular at Baypath Humane Society of Hopkinton. “So many people are reaching out” to foster animals during their time at home, said Elizabeth Jefferis, executive director.

Dogs are no longer being transported because of safety concerns for the individuals involved in bringing the animals from shelters elsewhere in the country, she said. But Baypath still has a few dogs that it obtained through local animal control officers or as local surrenders.

The shelter still is taking in local cats, including a few surrenders and some strays. Baypath recently brought in two kittens found near a dumpster in Worcester, for example. “We’ve taken in a fair number of cats,” Jefferis said.

No visitors are allowed in the facility because the building is too small to allow for safe social distancing, she said.

Animals headed out for fostering are being transferred to the vehicles of those taking them in in the parking lot of the facility, with staff members wearing masks and gloves and using proper sanitizing steps, Jefferis said.

Jefferis hopes the increased interest will lead to more people becoming involved in Baypath, which also offers emergency assistance during the crisis, with information available at the organization’s website: baypathhumane.org.

Another Hopkinton-based organization, Brown Dog Coalition, has received a “generous outpouring of foster and adoption applications,” said Annie Covino, who is one of the organization’s founders. “We feel so supported during these challenging times,” she said.

Covino said that agencies in their network and those transporting animals “have worked overtime to adapt throughout the pandemic to optimize social distancing and sanitation. Change is hard, but we can safely continue rescuing and adopting out animals with the proper precautionary measures in place.”

Like so many, she watches the governor’s informational updates each day and pays particular attention to the essential services list. Organizations and workers responsible for the care and custody of animals, pets and livestock are considered essential, Covino said, and their work continues.