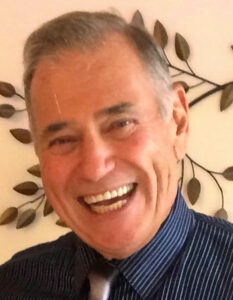 Anthony Alessi, 74, of Holliston, passed away at his home on Sept. 6. He was the son of the late Phyllis (Mattson) and Salvatore Alessi.

A combat veteran of the Vietnam War, Anthony was a well decorated corporal in the Marines, serving in the 1st Battalion 7th Marines. He was a devoted family man who loved time spent with family and friends. Anthony was a Mason, a member of the American Legion, an avid outdoorsman who enjoyed hunting and fishing, and someone who took pleasure in dancing at the Arthur Murray Dance Studio in Natick.

He is survived by three sons, Anthony F. Alessi and his wife, Kristen, of Northborough, Paul Alessi of Hopkinton, and Stephen Alessi and his wife, Michelle, of Haverhill. He also leaves behind his girlfriend, Larisa Simenova of Natick; his siblings, Anne Murray of Uxbridge, Janet Lewis and her husband, Paul, of Sandown, New Hampshire, June Bushee and her boyfriend, George, of Dedham; six grandchildren, Anthony J. Alessi, Nicholas Alessi, Meghan Alessi, Ryan  D’Entremont and Isabelle and Connor Alessi; as well as many nieces, nephews and cousins, along with numerous close friends and colleagues from Proctor & Gamble and Verizon. He is predeceased by his sister, Pauline Alessi.

In lieu of flowers, donations may be made to the New England Center for Veterans at www.nechv.org.