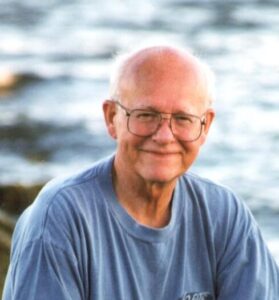 Tony joined the Marine Corps shortly after high school graduation. Following basic training he was sent to sea school and served as a seagoing marine aboard the USS Randolph. Following that assignment he served as a military policeman at Camp Lejeune in North Carolina. He was honorably discharged with the rank of lance corporal.

Tony returned to Worcester and worked as a draftsman for the David Clark Company. When the company secured a contract to design and build spacesuits for the Gemini project, Tony accepted a transfer to NASA in Houston to lead the team for the duration of that assignment.

He returned to Massachusetts and decided to change his career direction. He attended Framingham State College and graduated with a B.A. in English. He often joked about being mistaken for a professor by the younger students. Following graduation he completed a training program in computer science and worked as a management consultant in that field for various clients in New England until his retirement.

Tony enjoyed music, especially classical, and was an avid reader. He built up an extensive collection of books and CDs and was seldom seen without reading material or a crossword puzzle in his hands while music played in the background. He enjoyed following local teams, particularly the Patriots and Red Sox. Tony enjoyed fishing, and until his health prevented it, an occasional golf game. He was a family man and loved spending time with the wife and kids at home and on vacations. After retiring he developed an interest in cooking and prepared many creative and delicious meals. Dinners will never be the same without Grampy’s homemade buns.

Tony is survived by a sister, Diane LeBlanc of Holden, a brother, Rev. Evan Plante and his wife, Carole, of Worcester, sisters-in-law Jennie DeLuca and Rosemarie Dicampo, and brother-in-law Leonard DeLuca, all of Milford, as well as many nieces and nephews. He was predeceased by a brother, Arthur Plante of South Carolina

A funeral service was held Nov. 10 at the Consigli-Ruggerio Funeral Home in Milford, followed by burial in Sacred Heart Cemetery, Milford.