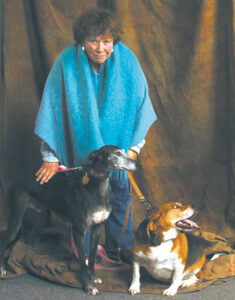 Louise Coleman founded Greyhound Friends in 1983 and ran the kennel on Saddle Hill Road until its forced closing.

There is no middle ground with Louise Coleman. You are either with her or against her.

Some revere her for the many years of work she did founding Greyhound Friends in 1983 and then running the Saddle Hill Road facility (which opened in 1987) for three decades, saving thousands of dogs, many of whom otherwise were certain to be condemned to death. Others chastise her for the kennel’s forced closing by the state and the attorney general accusing her of using the charity’s finances for personal spending and failing to account for other funds. (Coleman signed a deal with the AG’s office in which she did not admit to wrongdoing but agreed to pay $40,000 to another charity and accept a ban on taking a fiduciary role with any charity in the state.)

Last month, the newly refurbished Greyhound Friends kennel was inspected by a Hopkinton official and deemed satisfactory, so the organization was granted a new license, two years after it was revoked. However, the kennel was waiting on the Massachusetts Department of Animal Resources to lift a cease and desist order before it could welcome dogs once again.

In the meantime, a local group opposing the kennel’s reopening filed a petition with the town clerk’s office on Aug. 26. This appears headed to a public hearing — similar to one held last Sept. 11 — at which the Select Board could decide to revoke the license.

Per terms of a governance agreement between the Greyhound Friends Board of Directors and the AG’s office, Coleman is barred from having any formal role with the organization. But that doesn’t stop her from having strong opinions regarding what she feels was unfair treatment. She points to her 2017 criminal trial in which Judge David Cunis found her not guilty of a felony charge of cruelty to animals and downplayed the accusations of unsanitary conditions at the facility.

“It is clear to me that the defendant loved and cared for the dogs, and is to be commended for making the rescue of these dogs her life’s work,” Cunis said in his ruling on Dec. 1, 2017. “Although she may have taken her eye off the ball, so to speak, in terms of the physical upkeep of the kennel, this was indeed a regulatory issue that called for a regulatory solution.”

Coleman, 75, maintains her complete innocence and hopes to fully clear her name so that she can continue to help dogs.

“It’s still for me a really surreal kind of experience, both in terms of the fact that I was charged criminally, with the felony count, and also with the attorney general,” said Coleman, who authored a book about her work called, “Boston Boy: A Greyhound Journey.” “It just felt like I was really targeted by a number of different people from different backgrounds all at once.”

Following is a Q&A held with Coleman in late August.

Hopkinton Independent: What are your thoughts on Greyhound Friends regaining its license from the town?

Louis Coleman: “I think it’s fine that they are reopening. What is difficult for me is that their strategy seems to be constructed around — I just feel like I’m blamed for a lot of whatever is seen as being wrong. I just don’t agree with that. I have to salvage my credibility, salvage my reputation. Because I’m still really involved in a lot of international events. But if people see me as being compromised or suspect, that just doesn’t help. So, I don’t know what’s with Greyhound Friends. I think that they, it’s sort of, for me, it’s an unintended consequence of their strategy. It’s never made sense to me. But I don’t want to come across as being anti-Greyhound Friends, because I’m not, in any way, shape or form.”

HI: Why do you feel you are being blamed?

LC: “I just feel like I have to respond in as positive a way as I can about who I really am, what I think I really did, which was to save thousands of dogs. I have no regrets at all about that. I have no money. It’s not like I took anything or profited by any means. … It wasn’t a crazy place. The dogs were well cared for. There were a couple of high-level bureaucrats who really don’t like me. It’s a real hatred. I think that they’re not totally rational people.”

HI: What would you say to people on the opposing side?

LC: “Greyhound Friends began on that property on May 1st, 1987. It’s always been open all day, every day to anybody who walks in. So there was, I thought, a great deal of transparency, that people could come in. I worked really hard to make sure that every dog that got adopted went to the right people. I have a master’s in social work, so I have interest and experience in interviewing people. Thousands and thousands of dogs went out. There were a few dogs that didn’t go right away, but I think that’s not atypical of a lot of adoption places where I just felt those dogs needed people to work with them. … The photos [that appear to show poor conditions], I just see that as all very contrived. It’s just not true.”

HI: There were people who worked at the kennel and served on the board who made accusations against you and quit in protest. Why do you think they would do that?

LC: “There are different people with different axes to grind. One person wanted my job. … One of my foibles is that I think that people think and feel the way that I do about things. Then I’m really surprised when I find out that sometimes people have ulterior motives. And that was the case there. I think about it as a convergence of malevolence. I’m usually pretty astute, but I just kind of really walked into the whole thing.”

HI: Did Greyhound Friends take in too many dogs for the space it had?

LC: “When I first started saving greyhounds it was a zillion times more hectic. … At times there were many, but they all got taken care of and they all landed right-side up. I always feel like — and I don’t mean to sound grandiose — it’s a little bit like someone saying to [Oskar] Schindler that he had too many Jews [that he was trying to save from the Nazis]. Not to equate people to dogs, but it’s sort of that concept.”

HI: What went into the decision to take in other breeds, which allegedly contributed to the overcrowding?

LC:  “What happened increasingly was that shelters out in the midwest would call and say, ‘Can you take some greyhound mixes?’ And I would say OK. Then they would say, ‘Can you take some hounds and some beagles?’ I saw it in a way of expanding interest in greyhounds instead of being excluding. Lots of times people just aren’t interested in adopting greyhounds. But if there were a different kind of dogs at the kennel that would draw more people in. I thought it was just more inclusive. And I still think that. I love greyhounds, for sure. But just greyhounds, I don’t think it’s very productive.”

HI: What are you doing now?

LC: “I feel lucky. I feel like I escaped from not only Greyhound Friends but all of the really mean people and landed right-side up, and I’ve just kept going. My main concern right now are the poor dogs in China who are being boiled to death. It’s horrible. I’m doing a lot internationally. But I have to be really careful that my name doesn’t get attached to things or it gets trashed. … The basic bottom line is I wish Greyhound Friends well, but I’m just kind of salvaging my work. And I am so really grateful to people who have ben really supportive to me. It’s the old truism about you find out who your real friends are when you’re in trouble. I thank those people a lot.”