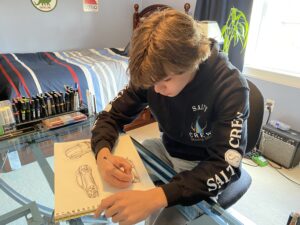 Connor Grady was awarded a Dunning Fellow from the College for Creative Studies in Detroit for his ability to draw cars, including a 1969 Porsche 912 (below).

Hopkinton High School junior Connor Grady was attending a car show a few years ago when an attendee asked an unexpected question.

“Do you have a business card?” the person asked.

“Which was kind of weird, because I was 12 years old,” Grady said.

But there was a sound business reason behind the question. Grady had drawn a photo of one of the vehicles he liked at the show and given it to the car’s owner.

When others saw his work, they asked if he was able to draw their cars as well.

So Grady “went and made business cards.” He would hand them out at the car shows he and his family attended.

Through his experience, he learned a valuable lesson in networking. “You meet one person, you meet a lot of others,” he said. “I met a really nice group” of car enthusiasts. 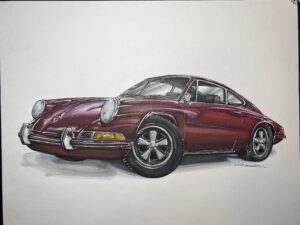 He developed a side venture drawing cars at $10 an image at the time, although his rates have since increased.

At first, he would draw the car “on the spot” and sell his image at the show. Now, he takes more time with his creations and gives clients a deadline.

His images reflect a lifetime love of both drawing and cars, starting when he played with Matchbox vehicles as a child. He also became an ardent fan of Chip Foose, a well-known automotive designer and artist who has starred in his own reality series.

That driving passion for automotive images earned him recognition as a Dunning Fellow from the College for Creative Studies, a school in Detroit that offers a program in transportation design.

Grady is one of 15 students across the country to earn this scholarship, which is awarded based on images of vehicles drawn by competition participants.

In typical years, Dunning Fellows would attend the college in person. Instead, because of pandemic limitations, Grady will take visual communications, a first-year college course that is an essential part of the school’s transportation design curriculum, virtually.

Students who attend and receive a C grade or higher will earn three college credits and create work to enhance their portfolio.

The course will run for four weeks from July 12 to Aug. 6 and will include guest speakers from the automotive design industry.

Hearing from guest speakers has particular appeal, he said, because he would like to learn more about a potential career in automotive design. “I haven’t met a lot of people who do this,” he said. “It’s not a common career.”

“The fact that I get to experience what it would be like” is exciting, he said.

One thing he has already learned is that design makes a difference for all cars. “You don’t have to have Lamborghinis for the design” to matter, he said. “Even the cheapest of cars — old, new — they all have different features that are really cool.”

He dreams of owning a 1988 BMW 535is, which has no airbags, is not the safest vehicle and is “a little out of my price range.”

“But I just can’t get over how it looks,” he said. “It just looks amazing.”

That said, he is happy with his VW Jetta GLI.

Whatever the vehicle they operate, drivers who take the look of their cars seriously appeal to Grady as he looks toward a possible future in automotive design.

“That’s the audience I want to target,” he said.