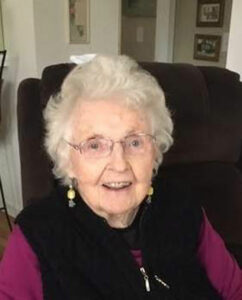 Beverly M. Cantrell, 88, of Arlington, went to be with the Lord on June 6. She passed away peacefully at home with her family after a long battle with Parkinson’s disease.

Beverly and Paul moved to Nashua, New Hampshire, from Arlington upon retirement. They enjoyed their retirement to the fullest by traveling the world and going on cruises. Beverly moved to the Cape in 2015. That her priority throughout life was her family is clearly seen in the beautiful family she has left behind.

A celebration of life was held at Skippy’s Pier 1 in South Yarmouth on June 13.

In lieu of flowers, donations may be made toward Parkinson’s disease research through the Michael J. Fox Foundation: michaeljfox.org/donate or P.O. Box 5014, Hagerstown, MD 21741-5014.