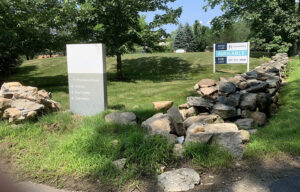 Damage to the stone wall is visible at the entrance to the office building at 71 Frankland Road. PHOTO/JERRY SPAR

Hopkinton’s Board of Appeals on Wednesday unanimously granted an extension of the compliance deadline to Oct. 30 to the owner of the former Liberty Mutual building on Frankland Road. The owner had appealed a cease and desist order regarding the storage and maintenance of construction vehicles on the property.

The town’s zoning officer filed the order in May after receiving a residential complaint to stop the owner — Feeney Brothers Utility Services, a Boston-based contractor — from using the grounds for work on vehicles in a professional office zoning district.

Feeney Brothers — doing business as 71 Frankland Investments, LLC — bought the office building and parking lot for $4 million last year from Seaboard Solar, which retained the forested parcel it had purchased from Liberty Mutual to use for a solar array.

Michael Sheehan, the director of real estate for 71 Frankland Investments, said he was seeking a temporary permit for four months in order to complete installation of camera and GPS equipment in vehicles owned by Feeney Brothers.

“Every year they’re required by DOT [Department of Transportation] and the utility companies to update their equipment,” Sheehan explained. “The fleet manager realized this building was vacant and put a crew down there.”

He had expected the work to be completed within 30 days, he added, noting that there is no mechanical maintenance performed on the vehicles. However, he encountered a delay in the shipping of materials required for the vehicles.

“A chip shortage around the world has held up all of the box trucks and some of the dump trucks,” Sheehan said. “The only reason we are seeking 140 days is that they are only coming in at two to three vehicles a week.”

The new vehicles are licensed and registered, tagged with the logo, and then have a safety sensor camera system and GPS installed, he said. Those vehicles are left on site, while the driver then takes the vehicle it is replacing off site.

He said there are 23 vehicles that still need to have this process completed — 17 box trucks and six dump trucks — but the shipping delay means that the company can only perform installations on two or three vehicles a week.

“All the work is done inside,” Sheehan said. “There’s absolutely no automotive work.”

The 15-acre property continues to be listed as available for rent, and Sheehan said he hopes to have it rented by November. It consists of 93,628 square feet of office/industrial space and 100 parking spaces, according to an online listing.

Chair Mark Hyman said the problem arose because the property is in a professional office district, where work on automobiles is not permitted. To provide relief, he offered to uphold the decision and extend the deadline of the cease and desist order to accommodate the work. Sheehan agreed to this proposal.

“We are going to be respectable to the neighborhood,” Sheehan added. “It’s a very narrow street.”

Hyman noted that the bylaw allows for assembly of telecommunications devices. However, it does not specify assemblage in vehicles, although in this case, he said “it is at least adjacent.”

“They way I view it is it’s vehicle-based stuff,” he said. “That’s a different, and I would argue, more intensive use than kind of assembling cameras.”

Assistant building inspector Michael Shepard said the problem arose because a vehicle had run over the mulch in a neighbor’s yard.

Frankland Road resident Steve Carbonneau, who lives across the street, said he is the neighbor who filed the complaint.

“The vehicle traffic began sometime around the end of March,” he said. “And we started to see large vehicles with heavy equipment entering the site.”

Some of the vehicles ran over his bark mulch while making wide turns, tracking mud into the street. He would go outside and clean up every couple of days, hoping that they “would get the hint.”

What disturbed him was when one of the vehicles “took out the stone wall” on the company’s property.

He added that there is “a little irony here” in that safety equipment for driving is going to be installed at a site that was damaged by a vehicle entering the property.

When he noticed more extensive mud tracking from his property from the tire tracks, Carbonneau said he felt “there was a complete disregard for the neighborhood,” prompting him to complain to the town.

“I wouldn’t even oppose a short-term ability for them to continue to do their work,” Carbonneau said, noting that there is no noise issue and no noxious fumes. “However, they would have to recognize that they can’t make the turn into that driveway.”

Sheehan said that the truck involved in the accident was making a delivery to Western Nurseries but missed the turnoff and attempted to use the site as a turnaround. He offered to make the property “equal to or better than what was damaged.”

Carbonneau said the damage “was definitely being done” by vehicles entering the Feeney Brothers site.

Jon Koeller, another abutter, said that there had been no outreach to the neighbors, which he called “disappointing.”

Resident Ann Karnofsky, chair of Save the Forest citizens group, said the vehicles caused a safety issue for walkers and bikers on the narrow street with no sidewalks. She suggested that the company move the installation work to Feeney Brothers sites in Canton or South Boston, which are in more industrial zones.

The board agreed to extend the date of the order to Oct. 30 to allow time for the equipment installation. Conditions were added to limit the number of total vehicles to be worked on to 25, no allowance for tractor-trailers, and limiting the hours of operation to 8 a.m. to 4 p.m. and delivery to between 9 a.m. and 3 p.m.