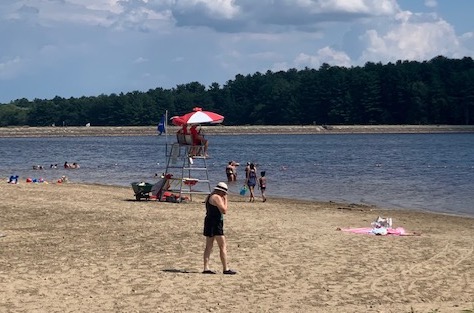 Swimming has resumed at the upper beach at Hopkinton State Park, although the main beach remains closed. PHOTO/BARRY ROSENBLOOM

Complaints from several residents living on or near Winter Street could eventually lead to the town adopting its own noise ordinance sometime in the fall. That along with COVID regulations for the upcoming school year and the status of local beaches were the main topics of conversation during the Board of Health’s Monday night meeting.

During the public comment portion of the agenda, Board of Health Chair Lisa Whittemore permitted citizens to speak about the noise coming from the home located at 222 Winter Street. The home belongs to Brendon Bullen, who owns a tree service.

Neighbors explained to the board that the noise resulting from the business is greatly affecting their daily lives.

“The biggest reason we moved to Hopkinton was for the peace and quiet,” said Joan Eastman, who lives directly across the street. “Six months ago, I started being awakened by trucks — loud trucks. It’s sounds like a construction site. I talked to them very nicely and they said they would be quieter, but they’re not being quieter.”

Eastman went on to describe other equipment noise and exhaust fumes she and her husband can smell from across the street. She added she has documentation, including photos and videos, detailing the noise.

“I’ve seen them bring in trees and grind them up. It’s extremely loud,” she said. “The property has become like something you’d see in a city. It’s horrible. It’s affecting our property values.” McFeely added she enjoys eating outside when she can, but the noise is just too much.

Abutter Ed Lyons stated he’s been complaining about the noise since March.

When it came to time for the board to discuss the issue, Whittemore made it clear “that the Board of Health’s purview is health-related issues — so, noise.” She added this also was a zoning issue as the business is being run out of a residential home.

Health Director Shaun McAuliffe said he visited the area several times and witnessed activities, such as idling trucks and tree chipping that were well above the decibel threshold permitted. “It’s clear to me the operation is in violation,” he said.

McAuliffe requested he be permitted to draft a noise ordinance based on what the Massachusetts Association of Health Boards follows. The town currently utilizes Department of Environmental Protection guidelines for such matters.

“What it will do is give us a little additional teeth and guidance on the structure associated with future violations,” he said.

Board members unanimously agreed to permit McAuliffe to draft the ordinance. A public hearing could be held sometime in the fall.

The board heard from Public Health Nurse Simone Carter and McAuliffe regarding the latest COVID-19 numbers.

Hopkinton and Middlesex County’s case rate currently has a medium risk designation. The Massachusetts Department of Public Health reports the positivity rate at 7.62 percent after being at 7.64 percent in July.

“We’re still seeing two or three cases a day that we know about,” said Carter, who added that a new COVID-19 vaccine that will help fight two strains of the virus is likely to come out in October.

As the town prepares for the new school year, the Health Department is evaluating what the pandemic response should look like moving forward as vaccines and testing are now widely available.

“I do anticipate guidelines will be rolled back even further,” said Carter.

McAuliffe said the Centers for Disease Control and Prevention is recommending flexible school and employer work scheduling and sick time allowances. Face coverings would be recommended in schools, businesses and communities with high levels of COVID.

The board also briefly touched on the status of local beaches. The two beaches at Hopkinton State Park were closed late last month for swimming due to high levels of bacteria. While the upper beach recently reopened, the main beach at the State Park remains closed.

Meanwhile, the town-run Sandy Beach, located on Lake Maspenock, has remained open throughout the summer season.

“I’m happy to report our beach is still open,” McAuliffe said. “The lifeguards have been doing a good job of clearing out goose waste and keeping dogs out of the water. All their efforts, as well as the [Lake Maspenock Preservation Association’s], are what’s allowing us to keep the beach open.”