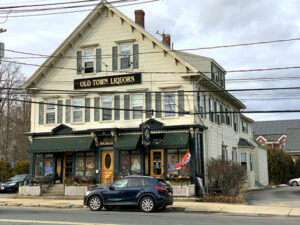 Old Town Liquor’s alcoholic license is set to be transferred to Country Farm, and a new commercial tenant will be sought to replace the liquor store on Main Street.
PHOTO/JERRY SPAR

The owners of the Country Farm convenience store at 3 Cedar St. (next to the Post Office) plan to change the business to a liquor store, and the Subway restaurant located inside will cease operation, a representative for the owners told the Select Board on Feb. 4.

Rashmi Corp., which owns Country Farm, is purchasing the building at 68-72 Main St. that houses Old Town Liquors and received approval from the Select Board to transfer the annual all alcoholic beverages license to Country Farm. Old Town Liquors will close, and a new commercial tenant will be sought to fill the storefront. There are residences on the upper floors.

Hinaben Patel, who has owned Country Farm for the past two decades along with Mukeshkumar Patel, will be the store’s manager.

“They’re trying to change the business a little bit, add the liquor license,” attorney John Mooradian told the Select Board. “The store will be more of a liquor store, with a few grocery items [primarily snack foods and soda].”

Select Board member Brian Herr expressed concern about the vacancy at the site of Old Town Liquors.

“That’s a beautiful old building, it’s been in the center of town for a long time,” Herr said. “I would hate to see this transaction create a long-term vacancy in that building and perhaps that building become in disrepair and the lot become in disrepair, etc. The town recently voted to spend a lot of money — with state and federal funding as well as our own — to beautify the entire downtown corridor. We don’t want to see that building become a big eyesore in the middle of that beautiful downtown corridor. So as long as there’s a plan to maintain and develop and aggressively fill that building, I’m good. But I don’t want it to not go that way.”

Mooradian assured the board that the owners intend to find a new commercial tenant.

“They don’t plan to leave it vacant,” Mooradian said. “They need to have someone in there to maintain the building and keep it going. … It will not sit vacant for years.”

At the Feb. 4 Select Board meeting, the owner of KEA Technologies shared plans to place a cannabis testing laboratory at 86 South St., which is a 28,800-square-foot single-story brick office building. As per Massachusetts Cannabis Control Commission regulations, it will require a host community agreement with the town.

Dr. Abdullatif “Bud” Zaouk, the founder, president and CEO of KEA Technologies, which he started in 2015 in Marlborough, said one of his company’s primary projects is developing an in-vehicle alcohol detection system.

“This is a program funded by all 17 automakers and the federal government,” he said. “The purpose of it is to have in your vehicles in the next 4-5 years an alcohol sensor that can detect whether someone is above the legal limit or below the legal limit, and then whether they are allowed to drive or not.”

Zaouk explained that with marijuana becoming legal in multiple states, including Massachusetts, “the next big holy grail is developing in-vehicle cannabis detection.”

Zaouk established a separate company — called ATOZ — to do cannabis testing, research and development. He explained that his new testing lab — which have multiple levels of security — would acquire edible samples via secure delivery, and that once “what’s inside the sample is extracted, the sample is disposed of” in accordance with state regulations.

Zaouk insisted there would be minimal amounts of cannabis on site, likely a few ounces.

“We’re not talking about holding any significant quantity of cannabis,” he said.

The Select Board voted unanimously to allow the town manager to begin the process of discussing a host community agreement.

The proposed International Marathon Center moved another step closer to reality when the Select Board announced Feb. 4 that the 26.2 Foundation was the winner of the competitive bid process to build and operate the facility at 45 East Main St., on a parcel of land gifted to the town by Legacy Farms LLC.

“The 26.2 Foundation submitted a very strong and very detailed proposal that met or exceeded the requirements of the request for proposals,” town manager Norman Khumalo said in a statement. “The vision of the IMC displays the many benefits to the community and the MetroWest region.”

The IMC will include a museum, hall of fame, auditorium, conference and event space, and exhibition halls, along with education and research space available for use by business, education and private community groups.

“The IMC is a great opportunity for the town that will bring commerce, positive energy and notoriety to Hopkinton,” Select Board chair Brendan Tedstone said. “The IMC will showcase to the world what an amazing community Hopkinton is. Not just for the one week in April during the Marathon, but all year long.”

If approved at the Annual Town Meeting this May, the IMC is expected to be open prior to the 2024 Boston Marathon.

Hopkinton’s Dawn Smith recently was named to the list of Best-in-State Wealth Advisors published by Forbes magazine. The list recognizes financial advisors who have demonstrated high levels of ethical standards, professionalism and success in the business.

The rankings are based on data provided by more than 11,000 of the nation’s most productive advisors. Smith was chosen based on assets under management, industry experience, regulatory and compliance record and revenue produced over a three-year period. Smith is owner and chief executive officer of Hopkinton-based Oasis Financial Services, a private wealth advisory practice of Ameriprise Financial Services, Inc. Smith, who graduated from Dartmouth College with a degree in psychology, has 27 years of experience with Ameriprise Financial.

Oasis Financial Services also announced that Nermin Khalil has joined the office as a financial advisor. Khalil has nine years of experience in the financial services industry.

Middlesex Savings Bank announced that its charitable foundation recently made a $520,000 donation to 52 local police and fire departments. Among the recipients is Hopkinton, as its Police Department and Fire Department each received $10,000.

The Select Board voted to accept the gift at its Jan. 21 meeting and expressed gratitude for the bank’s donation.

“Middlesex Savings Bank’s gift to our local first responders is given as a gesture of gratitude and recognition for all that they do to keep our communities safe,” Middlesex president and CEO Mike McAuliffe stated. “We saw that firsthand last summer when several local police and fire departments responded to the downtown Natick fire across the street from our branch. As a 185-year old community bank, supporting the organizations that care for our customers and neighbors is a vital part of our heritage.”