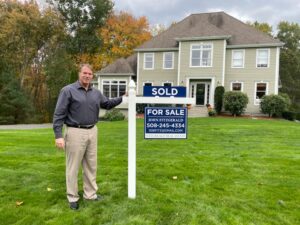 In the fall of 2020, Hopkinton resident John Fitzgerald realized his ambition of becoming a broker and small business owner with the launch of Fitzgerald Real Estate. Fitzgerald says his years of experience working as an agent for a corporate real estate office helped him realize that he would be able to better serve and educate clients by being his own broker.

As a real estate broker, Fitzgerald can work independently, hire other agents and adjust his commission. Fitzgerald notes that his fee is “negotiable,” explaining that there is no standard commission rate in Massachusetts. If he sells a house quickly with minimal effort, for example, he might not charge a full commission, unlike agents beholden to corporate real estate agencies. This ability to be both flexible and candid with clients is important to Fitzgerald.

As a local who’s passionate about investing in Hopkinton, Fitzgerald values community connections. Recently, he was selected to serve on the 2022 Community Service Committee, a Greater Boston Association of Realtors group. Fitzgerald also volunteers in the schools, serving as the coach of his son’s middle school robotics team. When Fitzgerald heard that the TV show “This Old House” was looking for homeowners to help, he connected them with a Hopkinton family who needed a fence to keep their kids and puppy safe from a backyard pond.

When it comes to being forthright with his clients, fees aren’t the only thing up for discussion. “For a lot of people, this is just a paycheck,” Fitzgerald says of the industry. “They don’t care as long as the deal gets done.” Fitzgerald, on the other hand, says he has talked people out of selling their homes. He cites as one example a couple who was going to run out of money after six years if they sold their home and moved into a rental. Rather than making the sale, Fitzgerald connected them with a financial professional and reached out to the couple’s adult children to suggest improvements to their parents’ current home.

Another benefit to working with a local broker like Fitzgerald, he says, is that “the money stays in Hopkinton” rather than going to a corporate office out of town.

People have told Fitzgerald that he’s not “salesy,” and he concurs: “That’s never been my personality.” It’s a cutthroat business, Fitzgerald says, but his approach is anything but ruthless. “Everybody knows in their gut the difference between right and wrong,” Fitzgerald says, referring to unscrupulous behavior he has seen in real estate. “I like putting my head on my pillow at night and sleeping,” he adds. “I like setting an example for my son.”

Reflecting on his work and the industry, Fitzgerald says, “I just want people to be treated fairly.” In an effort to develop more integrity-focused agents, Fitzgerald plans to open his own real estate school in the future. “I want to help them grow their business,” he says. “I’m going to be right there next to them, showing them how this is done.”