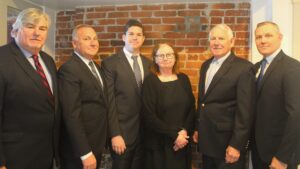 After 30 years, the Nealon & Nealon family law firm is both moving and expanding. With the addition of family member David Click as partner, the law office has become Nealon, Nealon & Click and relocated to the heart of Hopkinton. The growing firm is “very excited” to welcome clients to its new 85 Main Street location, says Tom Nealon, one of the current partners along with Timothy P. Nealon.

The firm handles a wide range of cases, including real estate, elder law, family law, civil litigation, land use, estate administration and small business representation. With the addition of Click in January and Jack Nealon last summer, Nealon, Nealon & Click now has a total of six practicing attorneys. Collectively, the support staff has more than 75 years of experience. This background paired with the group’s breadth of case expertise make the firm well suited to serve the community, Tom Nealon says.

“What we take pride in,” says attorney Kathy Nealon, “is being able to assist clients with what initially appear to be overwhelming circumstances for them and our ability to get them through.” Cases involving family law and elder law, for example, “can be quite emotional,” she says.

The Nealon and Click families have been engaged with the Hopkinton community for many years. Kathy Nealon, for example, was involved in the Hopkinton Friends of the Seniors fundraising group. Tom Nealon has served on the Hopkinton School Committee and town building committees. Jack Nealon previously served as interim director of the town’s Parks & Recreation Department and is one of the founders of the charitable housing organization Live4Evan.

Kathy Nealon says the civic engagement quality among her family members is “absolutely an outcome of our parents’ enormous involvement and also of our grandfather.” Joseph Sullivan, grandfather of Kathy, J. Timothy and Tom Nealon and great-grandfather of David Click, Timothy P. and Jack Nealon, was part of the initial installation of Hopkinton’s modern-day Water Department in the 1930s.

Kathy’s father, Robert T. Nealon, became the town clerk in 1951, a job he assumed after the sudden death of the previous clerk. “There was a knock on our door on Church Street,” Kathy Nealon recalls. “The quote-unquote ‘town fathers’ came and said to our father, ‘Bob, would you be willing to take on the town clerk?’ ” Twenty years later, on Jan. 29, 1971, Robert’s wife stepped up to the plate upon his passing. Mary “Bunnie” Nealon went on to serve as town clerk from 1971 to 1997.

While continuing to honor the family’s history, the firm is looking to the future with excitement. “Being able to practice as a larger firm allows us to take on more clients,” Jack Nealon says. “Sometimes small firms struggle with bandwidth, whereas that’s something we’re really looking forward to — taking on new, different types of matters because we have that much more experience and capacity.”

← Professional Insights: What are your financial resolutions for 2002? Farrell's hat trick leads U.S. hockey team to win in Olympic opener →