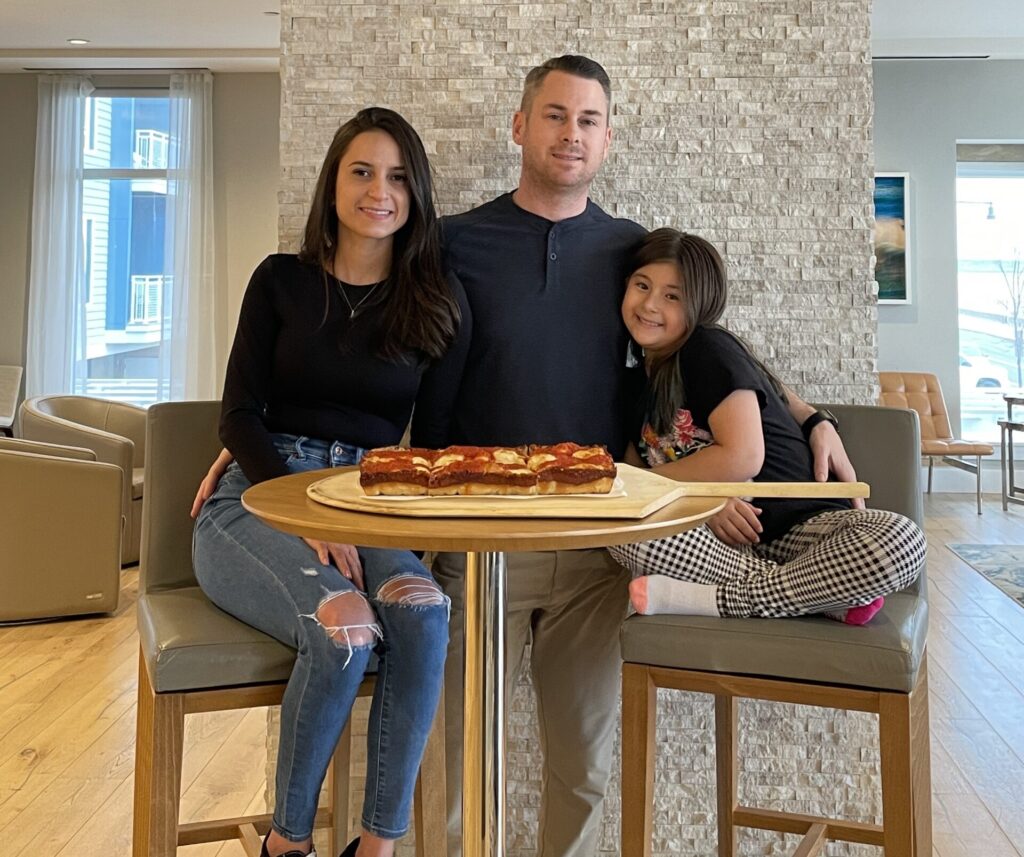 Troy Sproul is shown with his wife, Vanessa, daughter, Ariana, and one of his Detroit-style pizzas.

Airy, crisp, complex with a crust that will have everyone fighting over the corners — these are just a few of the delectable words Troy Sproul uses to describe the menu at Blue Square Pizza, coming to Hopkinton in mid-May. Sproul has spent 14 years in the pizza business, but it’s just over the past year that he has immersed himself in the science of sourdough bread baking, which is the heart (and stomach) of his creations.

Sproul was working with OTTO Pizza, a Maine-based company, when he became interested in Detroit-style pizza, but he found that the company’s dough recipe wasn’t compatible with the Detroit style. “So I said, if I’m going to do this, I have to really learn how to mix dough myself,” Sproul recalls. He devoured books on pizza making but was still left with an abundance of questions. “So, I shifted my focus to bread baking, and I started finding answers to my questions and the science behind fermentation.”

Most pizza makers are taught a standard technique of mixing flour, water, yeast, salt and oil, Sproul explains, which results in a similar product across the board. “When I started studying bread baking, I realized there’s a great opportunity here because if you apply some new principles, you can create a pizza dough where the crust is the most desirable aspect.”

These discoveries would lead Sproul on a months-long journey to creating his own proprietary, organic sourdough. “A typical pizza place will use commercial yeast, which bypasses key enzymatic processes,” Sproul explains, “but with a sourdough culture, you have bacteria, enzymes and wild yeast, which break down carbohydrates, sugars and starches. So, a lot of the digesting is done for you before you consume the product, so you’ll feel much better after you eat any sourdough item, whether pizza or bread.”

There are several key aspects to a Detroit-style pizza, Sproul says. First, it’s square-shaped. Authentic Detroit-style pizzas are cooked in a blue steel pan (hence the name Blue Square Pizza). In the 1940s, the pans were used in automotive factories, Sproul says, and Italian workers would bring them home to press out pizza dough. Detroit-style pizza dough also is more hydrated (at least 70 percent water) than typical dough. Another key ingredient is Wisconsin brick cheese, which extends to the edges of the pizza, creating a caramelized crust. Finally, the sauce is applied after the bake in the shape of two red Motor City racing stripes.

In addition to offering outstanding pizza, Sproul is committed to supporting the community through the Blue Square Tips for Kids program. Employees will be paid a livable wage, Sproul says, so tips will be categorized as charitable donations and directed to a different local nonprofit each quarter.

Blue Square Pizza is located at 30 Main Street. To learn more, visit bluesquarepizza.com, check out @bluesquarepizza on Instagram or call 508-435-0001.

← Baypath Adoptable Animal of the Week: Cookie Letter to the Editor: Pray for School Committee →