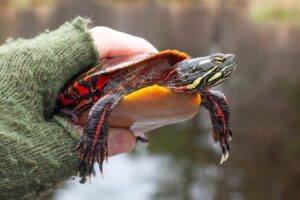 One of the turtles frequently spotted in town is a painted turtle, which like all turtles should be handled with care when helping it to safety. PHOTO/MASSWILDLIFE

Eight-year-old Aanya Soni loves taking walks with her dad and her dog, hoping to catch a glimpse of her favorite animal, a turtle.

But some of her turtle sightings have been troubling. She was sad to see some of her beloved turtles had fallen victim to motor vehicles.

The sights discouraged her. But it also made her determined to help.

So she wrote an email to Ed Harrow of the Conservation Commission, asking if anything could be done to help keep the town’s turtle population safe.

While riding his bike, which gives him more time to observe the landscape, Harrow also had seen turtles crossing town roads. In one case, he stopped to help a spotted turtle make its way safely across the street. 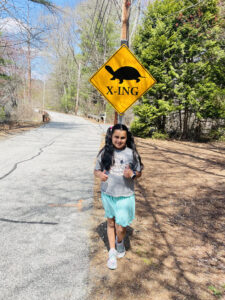 Aanya Soni, who reached out to the Conservation Commission in an effort to help protect turtles, poses next to one of the new signs in town.

He was touched by Aanya’s letter. “One little child can make a difference,” he said.

Working with Conservation Commission chair Jeff Barnes and the Department of Public Works, Harrow pushed to install “Turtle crossing” signs in various locations where the animals have been known to be active.

The signs were put up by DPW workers, including Mike Mansir and Phil Schiloski, with the support of DPW director John Westerling.

This is the first time such an effort has taken place in Hopkinton, Harrow said.

These campaigns are most effective when the signs are placed seasonally, from spring until fall, removed during the winter, then placed again in the spring, which is the plan in Hopkinton, Paulson said. This “re-alerts people” to the active turtle population and makes them less likely to overlook the signage, he said.

Paulson hopes the signs will remind the driving public to drive slowly and to be aware of their surroundings, an approach he said can save human lives as well as those of turtles.

The most common turtle sightings in Hopkinton are painted turtles, snapping turtles and spotted turtles.

If you see a turtle crossing the road, “your safety’s your number one priority,” Paulson said. Ideally, just slow down or go around the turtle to allow it to continue to cross, he said.

If you are able to stop safely and traffic conditions allow, you can help the turtle reach its destination, he said.

But don’t make the mistake of returning the turtle to where it was coming from. Instead, move the animal to the direction it was headed, he said.

“They have a pretty hardwired system” that tells them the direction they need to go, an “internal GPS, if you will.” If returned to where they started, they will only backtrack and put themselves at greater risk.

To move a turtle, gently scoop it up with a snow shovel and move it, or place a rag quickly over its head to catch it off guard and then carry it safely. Or, particularly for a snapping turtle, which can be “bigger in size and in attitude” than its smaller counterparts, use a bite stick on which the animal can chomp, then move the turtle and stick to the right direction.

Pick up the turtle and hold it parallel to the road, since a vertical hold can be harmful to its respiratory system, Paulson said. And try not to carry it by the tail, since that also can hurt the turtle.

Be aware, he said, that some turtles crossing are females looking to lay eggs, particularly in May and June. When that animal is killed, so is the next generation she is carrying. This can be a particular loss if that turtle’s population is on the overall decline.

“Every turtle matters,” he said.

Aanya agrees. “Everyone should love turtles and all animals and should try to help them,” she said.

Anyone with ideas on placements for turtle crossing signs should email annar@hopkintonma.gov. For more information and to report wildlife sightings, visit linkinglandscapes.info.