Town Election set for May 20 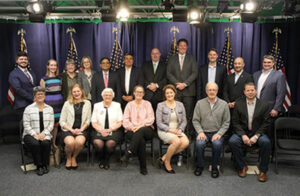 Eighteen of the 24 candidates running for office in Hopkinton’s upcoming annual Town Election participated in the Hopkinton Women’s Club Meet the Candidates Night held on April 24 at the HCAM-TV studios. In addition to their opening and closing statements, the candidates responded to questions from the audience and online viewers covering several issues including residential growth and support for the town’s aging population.

The first question of the night was directed to the selectmen candidates and asked what was being done for the town’s aging population with respect to rising tax rates. Answering first was Mary Jo LaFreniere, who currently serves on the Board of Assessors and is a member of the Tax Relief Committee. She cited many of the programs currently available for seniors.

“We have a great number of exemptions in town,” she said, noting that the application for the means-tested senior exemption is available from the assessor’s office. “Seniors are being looked at very closely and we now have a new BRAVE Act. I really think that we are trying to do things for seniors and I think we can do a better job. It’s just finding ways to do it.”

Responding next was Shahidul Mannan, a current member of the Appropriation Committee, who said, “We all empathize with our great citizens who built this town and are now being priced out of the very place that they built, so we have to do something.” And while he acknowledged that there was an existing process, he said it was not enough.

“We’ve got to simplify, that’s number one, and secondly I get a sense, from looking at the numbers, that we don’t have enough funding there,” he said. Suggested additional steps by Mannan included encouraging more contributions to the Tax Relief Fund and broadening the criteria. “But last, but not least,” he added, “we have to do something about our tax increase. The way to handle it is getting new revenue so we can lower the burden on residential taxes and we have to put more oversight so we can manage our budgets with a little more close attention.”

Brendan Tedstone, an incumbent seeking re-election, commented that LaFreniere had summed up the means currently in place and said that no one cares that the town’s current tax rate is $17.17 per thousand. “What they care about at the end of the year is the check that they are writing,” he said. “At the end of the year, it’s about how much you are paying.”

Tedstone also said that seniors and veterans are his priorities, and not just as a selectman but also in his life. “I think that these people who have lived in town forever deserve to live in town,” he said. “I think there are many plans that we can do to work with the seniors to make it so it is affordable to them. … To me, in my heart, they and the veterans are the most important people in town.”

Current Board of Selectmen Chair Claire Wright was the last to weigh in on efforts to support seniors and said that one step recently implemented included making the current information about senior tax relief more readily available. One document that will show all the areas where tax relief may be sought, along with assistance, is available at Town Hall and will be available at the Senior Center as well. She also cited services provided by the Senior Center, many of which continue to grow, and services offered through the Board of Health and the Hopkinton Public Library.

Added Wright: “But down to the dollars and cents in the budget process, this is something that is continually on our minds and it has been a focus of the Board of Selectmen in every budget discussion. … I can assure you that we have worked our budget process every meeting until the very end to try and make sure that we ran a lean government that tried to respect all our citizens and serve all of our citizens well.”

Shifting from support for seniors to the issue of residential growth, the next question from the audience asked Planning Board candidates how they would address that growth, and if they were heading up a strategic plan, what would be their first step.

Responding first was Robert Benson, an unenrolled candidate in the contested race for the two-year unexpired term. While he talked about the role of the Planning Board and its relation to the Zoning Advisory Committee and the rules and regulations that are already in place, he also acknowledged that the effect of recent residential growth is a real issue.

“The Planning Board needs to be more forward thinking as opposed to more reactionary,” he said. Benson acknowledged that sometimes reactionary is the only option, but said there needs to be more time to plan ahead. Addressing first steps that could be taken to improve that effort, Benson cited getting more input from the community at large, and doing that is where he thinks he can make a difference.

Also running for the two-year unexpired term on the Planning Board, Michael McNamara said, “On the residential growth, not a bad problem to have, right? There are a lot of towns that wish they were growing and house prices were going up, but it’s a hard issue to tackle.”

While he acknowledged that he did not know all of the zoning bylaws in and out, he suggested possible increases to lot sizes and pushing more commercial growth. Regarding a strategic plan, he said, “People can’t be on the same board for four or five terms. It needs to get fresh blood in. … That’s part of the reason I am running.  I just think people need to get involved and different people need to get involved.”

Patrick Atwell, running uncontested for a one-year term on the Planning Board, disagreed with McNamara and said that having people with experience on the board to help new members is beneficial.

“Strategically I think this town needs to up its commercial growth,” he said.

Atwell also advocated for citizen involvement and input and the need to ensure the town’s strategic plan is up to date.

Also responding to the growth question was current Planning Board member Gary Trendel, who is running unopposed for the five-year seat on the board. As an incumbent, Trendel shared two things the current board focused on this year: 1) restructuring how the Zoning Advisory Committee functions to make it less reactive, and 2) developing a subcommittee of the Planning Board specifically focused on the topic of growth.

Said Trendel: “There really isn’t an easy solution. … I think that one of the challenges that we have is that people live here, their kids graduate, and then they move someplace else. I’ve always been a big believer that if there are some ways that we can make this a more desirable place for our seniors or for people that don’t have kids to live here, then we can actually control or limit some of the things that are resulting in our growth and our tax rates and other challenges.”

There are five contested races this year: Board of Selectmen, Planning Board (two-year unexpired term), Town Moderator, Commissioners of Parks and Recreation and Commissioners of Trust Funds. To learn more about each of the candidates and to see the full event as recorded by HCAM-TV, visit https://youtu.be/c-xbGLroZoE.

Hopkinton’s Town Election is Monday, May 20. Polls are open from 7 a.m. to 8 p.m. at Hopkinton Middle School’s Brown Gym, located at 88 Hayden Rowe St. Entrance to the gym is through the back door.

← Meet the candidates for town positions Letter to the Editor: Markey promotes Mannan →