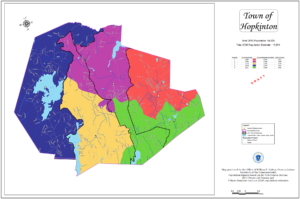 Hopkinton’s current four districts are outlined by the black lines. The proposed five districts are identified by different colors. Also being considered is adding a sixth district, in anticipation of further growth. An updated map is expected when more detailed population data comes available in the next few weeks.

Hopkinton’s population has increased over the past 10 years, according to new U.S. Census Bureau data. And with that may come growing pains, including the creation of a new voting precinct.

Town Clerk Connor Degan explained that Hopkinton has grown by just under 4,000 residents to a population of 18,758.

“That’s roughly the same amount of growth we had seen during the 10 years before that,” Degan said. He has been reviewing initial census data provided by the Secretary of State’s office.

“From what we’ve looked at, we definitely have to add at least one precinct,” Degan said. “They gave us the option to add a sixth precinct, which we can realistically do. We will probably have enough growth within 10 years where we will have to do that anyway.”

Space is the key issue now. Deciding where to place a new district and find a voting location is complicated.

“Where do we put voting precincts if we can’t fit them all into the [middle school gym]?” he asked, noting that a precinct can only contain 4,000 residents, according to current guidelines. “Then we may have to split up precincts.”

Degan would rather keep all of the voters in one location because if someone tries to check in at the wrong table, the concern can be rectified easily. This could be possible for five precincts, but not if the number jumps to six, he said. Not all precincts include town-owned buildings where voting could be held.

Keeping neighborhoods intact will be a key in the redesign process. There is also limited room for new residents.

“We’ve been growing a lot, that’s for sure,” he explained. “From some planning folks, the town’s buildout capacity is probably somewhere between 20,000 to 22,000. That’s the absolute most that we can fit. But it can also vary upon what is developed.”

The schools also currently have space issues, which has caused temporary or permanent additions to most of the buildings. The growing population eventually may impact school growth.

“The census data will give a better snapshot of different people and age groups, whereas someone might not fill out a local census,” he said. “I think the data will be helpful for the schools.”

The census data will aid the town in applying for grants, because the population served by them will be increased. There also are different regulations that come into play once a town’s population reaches 20,000 residents.

“They are still trying to get everything finalized to us,” he said of the Secretary of State’s office. “They used a lot of different ways to track the numbers. The numbers we got were from a group that worked closely with the Census Bureau and the Secretary of the Commonwealth’s office.”

Once the final data is received, his office can complete a finalized draft of a new district and precinct map. This will need to be approved by the Select Board and then by the state.

There is a possibility, depending upon how the districts are drawn, that neighborhoods might include more than one state legislative district.

“The state does a lot of legwork on this,” Degan said. “But they don’t know the community like we do. We don’t want to alienate or break up communities.”

It has taken longer to consolidate the census data than in the past because of the pandemic.

Areas with concentrations of people of color will try to be maintained to make sure no voting bloc becomes marginalized. The same holds true for senior citizens, he said, because they may be on fixed incomes.

Because Hopkinton has an open Town Meeting process, this may not be as big of a factor because everyone can participate. If Hopkinton were to change to an elected Town Meeting, the concentration of population clusters may impact who represents a given precinct.

“It’s important to keep an eye out for that in the future,” Degan said. “A lot of industry professionals have moved to Hopkinton. We’re really fortunate to have all of these intelligent people coming into our community. It’s just finding ways to deal with the growing pains.”

U.S. Census demographics show that the town has grown from 14,925 residents 10 years ago to 18,758 in 2020. While the white population has only grown by one-third of 1 percent to 13,733, the percentages of people of color or who have multiracial ethnicities have substantially increased. The language by which the census allowed people to identify themselves could be a contributing factor in this increase both in Hopkinton and nationwide because it allowed for multiple designations.

The most marked gain was in the number of Asian residents, which soared by 411 percent to 3,342 residents over the previous decade, now making up 17.8 percent of the town.

The Hispanic and Black populations also rose. The number of Hispanics grew to 733, an increase of nearly 175 percent. The Black population expanded by 50 percent to 183 residents. However, as a representation of the town, Hispanics are just 3.9 percent and Blacks are 1 percent.

The percentage of those who identified as “other non-Hispanic” rose by 328 percent, although that only equals 120 residents. The number of people who chose two races and non-Hispanic jumped by 328.57 percent to 638.