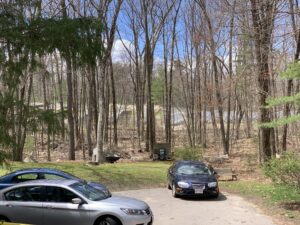 A solar array on a Lumber Street property is visible from the backyard of many homes on Alexander Road, in the Charlesview Estates neighborhood. PHOTO/JERRY SPAR

A Lumber Street couple who previously expressed a desire to expand their ground-mounted solar array revealed plans to start cutting down trees on 6.5 acres of adjoining property that they own.

Ben and Amy Chirco, who reside at 147 Lumber St., sent letters in early July to abutters informing them of their plans to start clearing work on or about Aug. 1. The Chircos’ property backs up to Alexander Road and Teresa Road in the Charlesview Estates neighborhood, and their existing solar array, installed two years ago, is visible from a number of homes there.

There also are wetlands between the Chircos’ property and the Charlesview Estates neighborhood. According to the Forest Cutting Plan application the Chircos filed with the Massachusetts Department of Conservation and Recreation (DCR), the wetlands will be left undisturbed except for one 15-foot strip that will provide better access, although trees will be downed in wetland buffer zones.

One of the conditions of the Chircos’ agreement with the town regarding the solar array was, “There shall be no further alteration or activity within the wetland resource access or the wetland buffer zones without an Order of Conditions, Determination of Applicability or exemption confirmation from the Conservation Commission.”

At Tuesday’s Conservation Commission meeting, the commission debated whether the Chircos’ were adhering to those conditions. While work being done on the adjoining parcels would not be included in the agreement, there appears to be some cutting planned on the original parcel.

However, Don MacAdam, the town’s conservation administrator in the Department of Land Use, Planning and Permitting, said the Chircos appear to have successfully gone outside the town to get an exemption.

“The forestry cutting plan is exempted under state law, Wetlands Protection Act and the town’s wetlands bylaw,” he said. “So there is an exemption for harvesting trees. Plus the cutting might not be taking place in the parcel that is affected by the agreement. … The commission’s role in this forest cutting plan is just to comment on the wetlands delineation.”

Chris Hagberg, whose home on Alexander Road backs up to the Chircos’ solar array, said there already is not enough screening, and this new plan will make it worse.

“Our big issue here is that this was agreed upon,” she said. “We worked hard between the Planning Board and the Conservation Commission to have this shielding stay in place. And I feel like this is just a bait and switch. We were sold a bill of goods and now they’re just going to come and tear all those trees away that are somewhat shielding us. And we’re going to be left with arbor vitae that are now 5 feet tall. And even then, we’re shielding a hill. If you’ve ever been out here, it’s a hill. We are looking up at a sea of glass.

“I know that maybe this isn’t your deal, but this is what was promised to the neighborhood, that, ‘Don’t worry, these trees are going to be here in between, it will be fine.’ And they won’t be cutting anything, because, ‘Oh, that’s all wetlands back there. That’s why we started the solar array where we started it.’

“And we have been having additional water. That 100-year drain has now overflowed five-plus times. So now you’re going to take more trees away, we’re going to have more overflow.”

According to another Charlesview resident, a group of neighbors have been reaching out to town boards and state representatives in an effort to combat the deforestation plan.

The Chircos’ DCR application indicates the objective is for “short-term harvest,” which is explained as, “Harvest of trees with the main intention of producing short-term income with minimal consideration given to improving the future forest conditions, which often results in a forest dominated by poor quality and low value species.”

Massachusetts officials have indicated they are planning to issue new rules to help limit where solar farms can be built, in an effort to discourage clear-cutting for this purpose. By removing the trees now, the Chircos might still be able to take advantage of solar incentives, because their land would no longer be considered a forested area.

Conservation Commission chair Jeff Barnes said the issue might be better addressed by the Planning Board.

“From our perspective my sense is that it’s OK, however … if an agreement was made with the Planning Board and the property owner on screening — which I don’t know, I don’t think any of us know — then the question needs to be directed to the Planning Board,” he said.

However, after further discussion the commission voted unanimously to reach out to town counsel as well as principal planner John Gelcich to get clarification, and ask the Chircos to hold off on any work until the commission has more information.