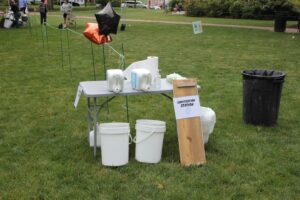 A sanitization station sits on the Town Common for patrons to use prior to visiting the Hopkinton Farmers Market on June 7. PHOTO/JOHN CARDILLO

As the COVID-19 pandemic stretches into mid-June, Hopkinton Police Chief Joseph Bennett said the town is on edge and his officers are seeing residents getting angry and frustrated with one another after weeks of largely staying inside.

The result has been an uptick in neighbor disputes, and issues between residents that the police department thought were long dormant have been resurrected.

“There is no shortage of people hurting or people angry,” Bennett said. “I’ve never seen a point in time when it was like this, and that’s even before the George Floyd murder.”

Floyd’s death, after having his neck pinned under the knee of a white Minneapolis police officer for nearly nine minutes, has sparked outrage and protests around the world. But Bennett said the health crisis has also created an environment in which people are coming into contact with one another and “the tension is so high, anything sparks an argument.”

Even so, arrests are down in large part because the police are working under a policy to make arrests a last resort. The policy mirrors what is happening in state courthouses, where only the most violent or dangerous of criminals are being held on bail or denied bail altogether as the justice system is mindful of not overcrowding jails and houses of correction during a pandemic.

Limiting the number of arrests protects both officers and the public at large, Bennett said.

“We recognize our officers are out interacting every day in public,” he said. “They are sharing cruisers and space with other officers and we recognize that we pose a threat to the public.”

Since there is no difference between an arrest and a summons — either results in a person being arraigned — police have used summonses in places where they otherwise would have taken someone into custody, Bennett said.

Overall, most people have been compliant with state and federal guidelines aimed at slowing the spread of the novel coronavirus. Despite some early pushback against wearing masks, including one that resulted in someone being assaulted, most have come to accept the necessity and courtesy of wearing face coverings, Bennett said.

Other police policies have changed, including not allowing people to walk into the station, and handling most matters over the phone. When responding to calls, officers do not enter homes as they typically would and instead ask residents to come outside.

Despite the challenges and frustration, Bennett urged Hopkinton residents to stay the course as the state entered Phase 2 of a four-phase plan to reopen Massachusetts businesses.

“We have all suffered a lot,” the chief said. “I think we want to continue social distancing and follow the guidelines that are given to us so we can get into Phase 3. We don’t want a setback right now.”

Hopkinton Health Department director Shaun McAuliffe also cautioned residents not to let their guard down. While the town continues to be recognized as “one of the top-performing communities in the commonwealth” in its handling of the COVID-19 pandemic, McAuliffe is concerned that people might be relaxing too quickly.

“We continue to do well,” he said at the June 2 Select Board meeting. “We’ve got 119 cases, eight of those are active, 98 recovered and 13 deaths. We have no active cases at Golden Pond and Fairview [assisted living facilities]. Of the eight active cases, the illnesses are related to contact with known COVID person at work or a social event, and within those cases there’s been some in-home spread.

“So it’s still out there. We need people to remain diligent, focus on hygiene, social distancing, face covering. … We need to refocus and make sure that we’re all committed to keeping Hopkinton healthy.”